Campaign Legal Center (CLC) and Center on Science & Technology Policy (CSTP) at Duke University filed a rulemaking petition with the Federal Election Commission (FEC) on June 29, 2021 asking the agency to close transparency loopholes that have allowed campaigns and political action committees (PAC) to disguise millions of dollars in political spending.

Although campaigns, PACs, and other political groups are required to report payments to vendors over $200, the FEC has created a loophole: if the vendor then subcontracts with a third party, payments to that subcontractor might not be disclosed.

This loophole is not absolute — a vendor cannot merely act as a conduit to disguise the entirety of a campaign's spending while staying within the law. For example, the Trump campaign violated campaign finance law by routing most of its 2020 spending through an LLC controlled by senior officials.

Still, many campaigns and PACs remain able to obscure the ultimate destination of their campaign funds while staying within legal lines. 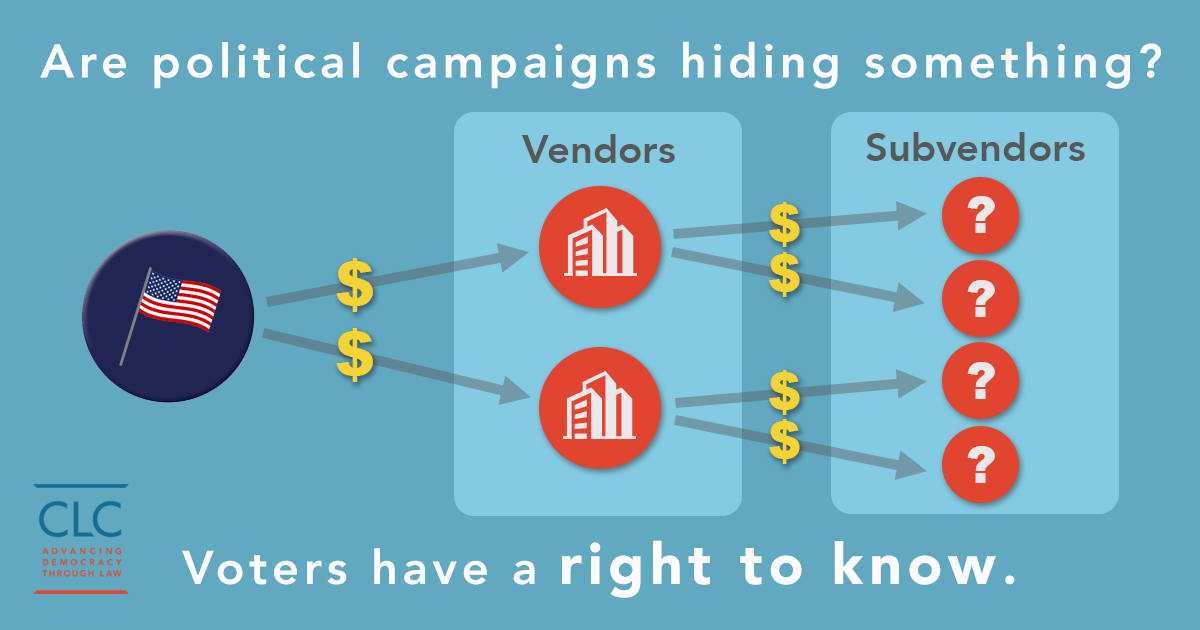 As a result, transparency suffers and voters, donors and researchers are denied essential information. The effect of this loophole is that voters are deprived of basic information about how candidates and committees are operating and donors are left in the dark about how their contributions are being spent.

The petition from CLC and CSTP asks the FEC to adopt rules making clear that all expenditures or disbursements made on behalf of or for the benefit of a campaign, PAC or other reporting entity must be disclosed in full, regardless of whether they are made via an agent, independent contractor, vendor or subvendor.

Earlier this year, CLC and CSTP hosted a panel discussion featuring FEC Chair Shana Broussard on the regulations that govern federal reporting of political subvendor spending. The panelists offered insight on current and potential reforms of political ad regulations and highlighted how those regulations could increase public transparency.

Voters have a right to know where campaign money is coming from, as well as how it is being spent. The FEC created this loophole decades ago, and now it is time for the agency to close it.

Georgia Lyon
Georgia is a Communications Assistant at CLC.
Rulemaking Actions the FEC Should Take in 2021
Learn about other campaign finance loopholes the agency should close.

Who Is Already Testing the Waters for 2024?