In Just One Election Cycle, Vouchers Have Changed Campaign Finance in the City of Seattle

Last November, Seattle’s Democracy Voucher program completed its first election, and post-election analyses to date have been extremely encouraging. Consistent with the initial signs of success, the numbers continue to show that 2017 donors in Seattle were more numerous, more diverse, and younger than ever before.

These results didn’t happen on their own. The diverse coalition of Seattleites who gave to candidates was a result of extensive community outreach by the Seattle Ethics and Elections Commission (SEEC).

This trailblazing program—and the efforts that catapulted it to success—should inspire cities across the country who agree that elections should be financed by the people, not by an unrepresentative handful of wealthy residents.

About the trailblazing program in Seattle

In 2015, Seattle voters passed the ballot measure that created the Democracy Voucher program. A central purpose of the program is to “giv[e] more people an opportunity to have their voices heard in our democracy.” The law also recognizes that the program is “vital to ensure the people have equal opportunity to participate in political campaigns and be heard by candidates.”

The program is straightforward in its design: The city gives every resident who is eligible to donate to campaigns four $25 vouchers. Eligible donors include both adult citizens and adult green card holders who live in the city. Those residents can then distribute their vouchers to participating candidates in the voucher-eligible races, which in 2017 were two city council races and the city attorney race.

For their part, participating candidates are subject to certain restrictions. Among other requirements, they must sign a candidate pledge vowing to follow restrictions on the amount they accept from any single individual, abide by contribution and spending limits, participate in at least three debates in the primary and three in the general, and refrain from raising money from any organization—like a PAC—that makes independent expenditures.

In 2017, eight candidates participated in the program in the primary, five did in the general election. These eligible candidates received more than 45,000 Democracy Vouchers from Seattle residents.

Back in October, Win/Win and Every Voice found promising initial signs of the program’s success based on data from the primaries—as they noted, voucher-eligible races saw higher participation among those with incomes under $50,000 and had higher proportions of young donors than the non-voucher-eligible mayoral race.

Since the election, the data have shown additional positive results.

For one, SEEC found that Democracy Vouchers poured in from all over the city: 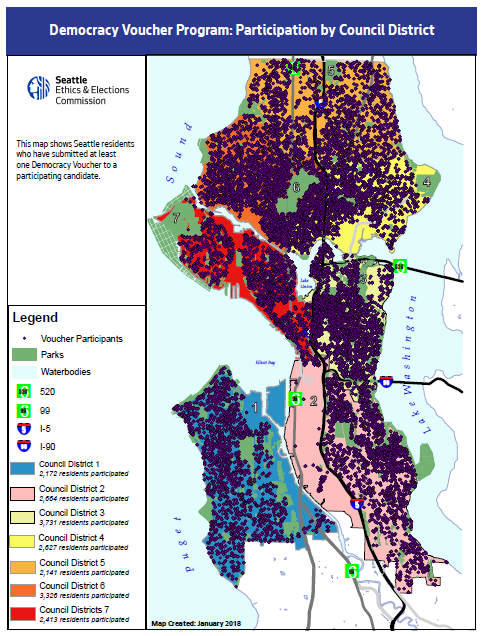 And Win/Win and Every Voice’s post-election report also documented how successful the program was in bringing new donors in to the process. Specifically, it noted that only 8,200 Seattle residents contributed to campaigns in 2013. With Democracy Vouchers, however, the number of contributors jumped to 25,000, a three-fold increase.

The 2017 donor base was more diverse than past elections in other ways too. In 2017, higher proportions of donors were female, came from neighborhoods with below-city-median household incomes, came from areas with higher levels of racial diversity, and were younger. The voucher program creates a strong incentive for candidates to engage with a broader representation of the population and the 2017 election demonstrated that this incentive worked.

As the report concluded, “Seattle’s Democracy Voucher Program is achieving its intended goals by generating historic numbers of new and small donors, diversifying the makeup of campaign supporters to better reflect the people of Seattle, and limiting the reliance on big money in local elections.” These promising results stand in stark contrast to the continuing trend on the federal level of a decreasing number of large donors accounting for the bulk of campaign contributions.

The Sightline Institute found similarly positive outcomes in its own post-election analysis. It found that even in its first year, Seattle residents understood the program very well (a testament to the extensive outreach efforts described below), that the number of Seattle donors skyrocketed, and that average donation amounts dropped significantly.

Simply put, Sightline said, “In just one election cycle vouchers have changed campaign finance in the city of Seattle. Candidates are receiving smaller donations from much larger—unprecedentedly large—donor bases.”

Public financing programs like this one matter from the candidates’ perspectives, too. For example, Seattle’s program has also widened the field of potential candidates. As one candidate remarked before the election, the vouchers have helped make running for office feasible for candidates that don’t have significant personal wealth.

What factors made the program so successful in its first year?

As the law required, all program materials had to “include key documents accessible to those with visual or other disability” and be available in languages spoken by a significant number of Seattle residents—which included a total of 15 languages.  SEEC made these requirements realities and also went further by making repeated efforts to make the program accessible and understandable to residents across the city. These efforts included:

Throughout its outreach, SEEC made a deliberate effort to connect with as many of its residents as possible, including those who have too often been left out of the political process. For example, the SEEC worked with groups such as the Seattle Commission for People with Disabilities, partnered with bilingual Community Liaisons for events like “community conversations” throughout Seattle, and aired its public service announcements in many different languages.

And this outreach wasn’t just for the voters—the SEEC also stayed engaged with participating candidates, providing training and Q-and-A sessions, and one-on-one consultations.

Together, these efforts serve as an important model for cities across the country  of how to achieve one of the primary goals of these programs—getting more people, and a broader representation of people, involved in the financing of campaigns.

Other cities are certainly taking notice—just this month, for example, the city of Austin consulted Seattle experts as it considered bringing a similar program to its city council elections in 2020.

Back in Seattle, the city is already looking ahead to future elections and thinking about how to keep improving the Democracy Voucher program. The program website already has information available for 2019 city council candidates. And Seattle is committed to evaluating its program’s first year and continually improving the program, including by commissioning an independent evaluation report that is expected this spring.

Thanks to Seattle voters who chose this program and the SEEC’s efforts to bringing as many Seattleites into the process as possible, there is more and more evidence that the Democracy Vouchers’ first year was a success at expanding and diversifying the Seattle donor base and, in the process, making the city’s campaign finance system more inclusive.