In late June 2018, President Trump flew to Wisconsin, headlined a closed-door fundraiser at the Pfister Hotel in Milwaukee, and then whisked off to attend the groundbreaking ceremony for the planned Foxconn manufacturing plant.

Weeks before, a Beijing-based “lifestyle company” began circulating an invitation for “three Chinese entrepreneurs to visit the United States,” attend the Milwaukee fundraiser, and “receive a separate photo shoot with the President.”

But admission to the fundraiser came with a price. Getting in the door required a $2,700 contribution to Trump’s joint fundraising committee. A picture with the President was offered to those who gave $25,000 or more.

Chinese nationals can’t make U.S. political contributions. So you might be wondering: how is it that “three Chinese entrepreneurs” could get invited to a fundraiser that requires a $2,700 contribution, and offered a picture with the president, which requires a $25,000 contribution? 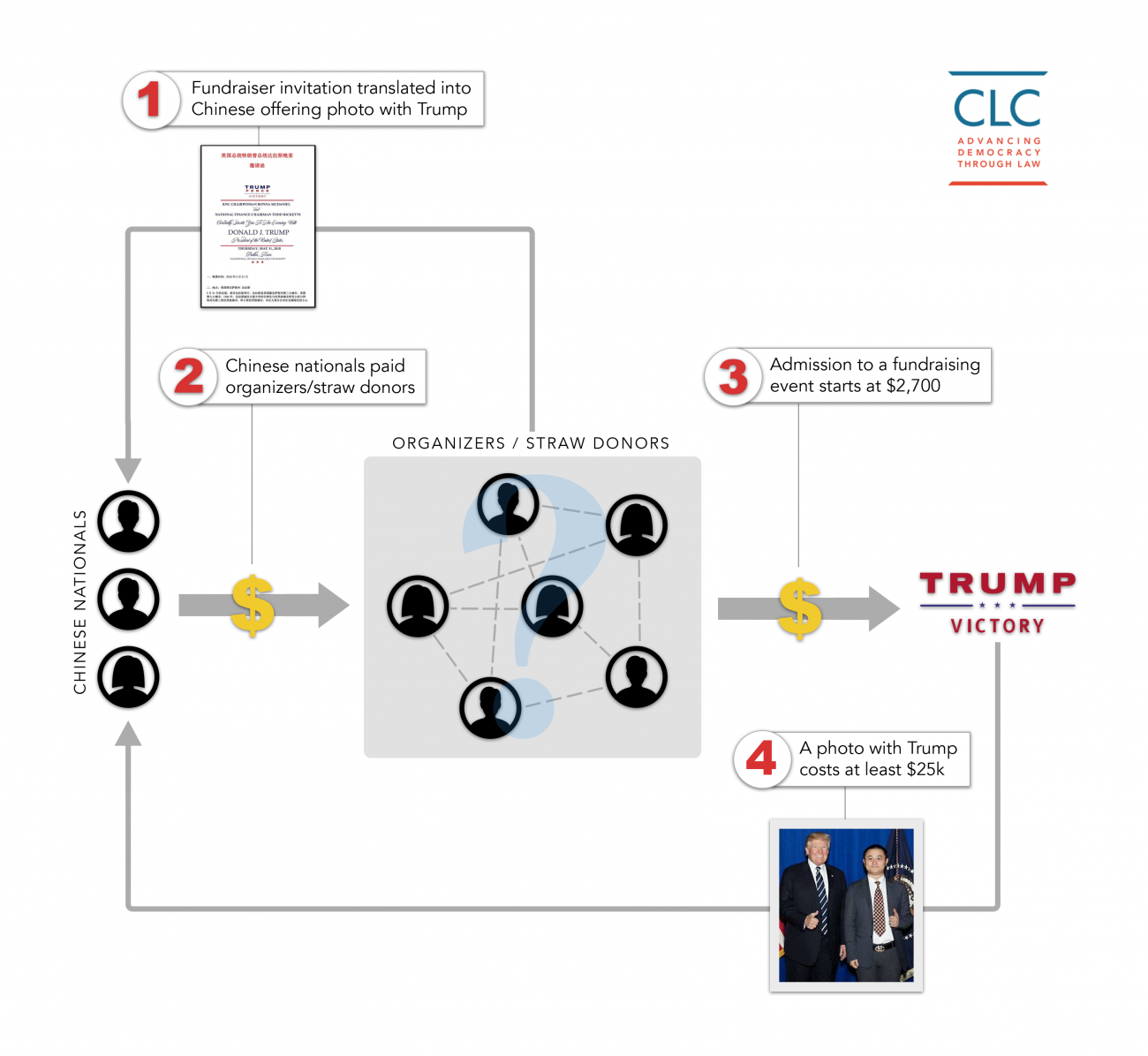 The Milwaukee event is not an isolated example. Li “Cindy” Yang, the Florida-based Trump bundler and day spa operator, appeared to run a similar operation. CLC found multiple invites to U.S. fundraisers, circulated by Yang and others, directed to wealthy individuals in China.

As the Washington Post put it, the invites “are part of a sprawling cottage industry claiming to provide intimate access to Trump, sometimes at official Republican fundraisers and often for a hefty fee.” Many invites were to fundraisers for Trump Victory, a joint fundraising committee between Trump’s reelection campaign, the Republican National Committee (RNC), and state parties.

According to the Post, an employee of one China-based company promoting the invites said the owner “routinely receives what she described as authentic invitations to exclusive Trump events in the United States and sells some or all of his allotted seats to Chinese nationals.”

Given the number of political tourism packages directed at Chinese nationals, and the routine participation by Chinese nationals in these fundraising events, it certainly appears that excursion organizers are facilitating the flow of illegal foreign money into U.S. elections.

CLC filed a complaint with the FEC asking for an investigation into these operations, and highlighted examples like these:

RNC officials previously described Chinese nationals participating in events like these as “guests” of U.S. nationals who made contributions.

But it is not plausible that dozens of wealthy U.S. nationals are routinely making contributions of up to $50,000 using their own funds, but then passing the perks associated with those contributions—such as admission to a closed-door fundraising event and a presidential picture--to a Chinese tourist who paid a travel firm many times that amount.

Instead, it is far more likely that U.S. nationals are being reimbursed for their contributions using some portion of the funds paid by Chinese nationals participating in these political tourism packages.

This is not the first time that foreign nationals have tried buying access through straw donations.

The public recently learned that Malaysian financier Jho Low illegally funneled over $1 million to committees supporting President Barack Obama’s 2012 reelection through Fugee member Pras Michel’s LLC and other straw donors. According to the Justice Department’s indictment of Michel, Low engineered this scheme so he “could buy access to, and potential influence with” President Obama and his administration.

Low’s efforts didn’t end with Obama; prosecutors are reportedly investigating whether he also laundered funds to Trump Victory in 2017 and into a campaign to lobby the Trump administration .

Low bought access to promote Malaysian interests, and later, to thwart an investigation into his allegedly embezzling billions from a state investment fund. We don’t know what the Chinese nationals paying for these fundraising excursions were after; federal authorities are probing possible intelligence operations, but some participants may have just wanted a picture with Trump. Excursion organizers may not have even told participants that money paid towards travel packages would be put towards political contributions.

But these cases demonstrate that foreign actors are exploiting the fact that selling access is common in the U.S. political system.

Perhaps not surprisingly, foreign actors want in on the game.