How Scam PACs Could Get Even Scammier 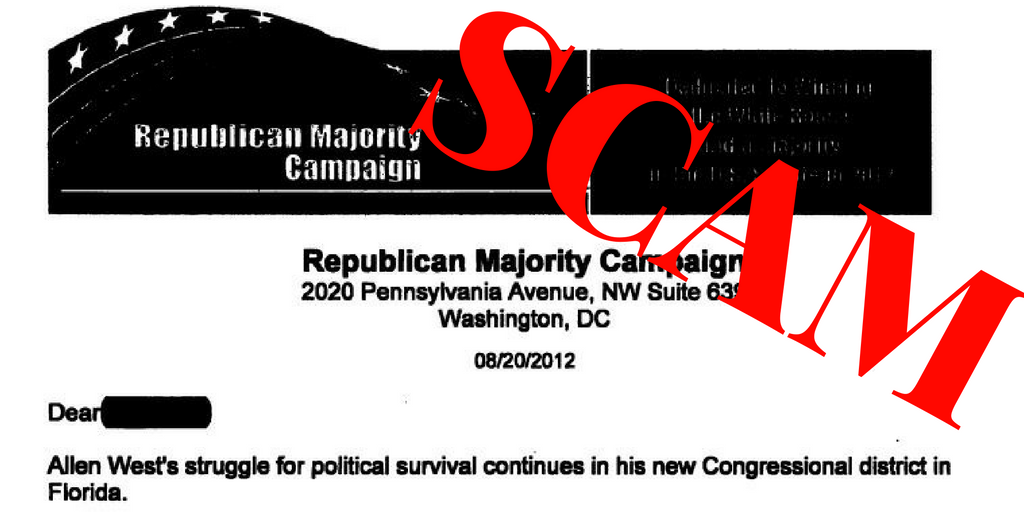 "Please, join with us today, and please give Allen West your swift and generous support, it's not a moment too soon,” read a 2012 fundraising email from a small California-based group called the Republican Majority Campaign Fund.

“Allen West needs our help to take on the double-teaming liberals,” read another, sent as the Florida Congressman’s reelection campaign heated up. "So, please, take decisive action to Save Allen West. An investment of $23.00 will help us reach over 200 voters and $57.50 will help us reach 500."

And people, believing this money would support West’s reelection effort, donated. The Republican Majority Campaign Fund raised more than $3.5 million in 2012, nearly all of which came in small “un-itemized” donations of less than $200.

But the funds raised largely did not support West’s 2012 campaign. Instead, almost all of the group’s money went back into more fundraising, salaries and administrative expenses.

Republican Majority Campaign Fund is not alone in using these deceptive fundraising schemes.

In recent years, unethical lawyers and consultants have made a cottage industry out of forming PACs that send urgent solicitations asking for small donations to “Overturn Obamacare” or “Draft Allen West for President”— but then, instead of using the funds raised to support candidates or causes, the political operatives pay themselves hefty consulting fees and spend the remainder on more fundraising appeals.

These groups, known as “scam PACs,” are ripping off well-intentioned activists to line their own pockets. Unlike candidate committees, which cannot pocket campaign funds or use campaign money for “personal use,” there is no such restriction limiting how PACs spend their cash.

And thanks to a recent court decision, scam PACs have a new tool in their arsenal that will make it even easier to deceive small-dollar donors.What this means is those running scam PACs are just about to get richer, all at the expense of everyday Americans and the grassroots movements they believe in.

Tea Party Leadership Fund, for example, tells grassroots activists that “Your immediate contribution could be the most important financial investment you will make to help return America to greatness.” Yet a Politico review of their Federal Election Commission filings revealed that 87 percent of that “investment” went to overhead; less than 14 percent of the money raised supported political candidates.

Scam PACs not only rip off a few individuals, Jossey notes, but can help kill a movement.

Scam PAC operators help drain a movement of financial resources, with activists’ meager funds flowing to self-serving lawyers and consultants, rather than to the cash-strapped candidates running for local office or the on-the-ground groups engaged in the difficult work of grassroots mobilization.

And, because scam PACs often ask for money to fund unrealistic goals, when the donations don’t create the promised results — Obamacare is still law, Paul Ryan is still speaker, Ben Carson is not president — people not only stop giving, but they may disengage. As Jossey notes, “any insurgent movement needs oxygen in the form of victories or other measured progress in order to sustain itself and grow.”

But those running scam PACs aren’t interested in helping give activists small victories that build their sense of power; they are interested in lining their own pockets — and fighting in the courts to make their scam PACs even scammier.

The Demise of the Naming Restriction

Jossey’s article came shortly after the D.C. Circuit Court of Appeals blocked one of the few legal protections against scam PACs earlier this month.

One of the few regulatory safeguards against scam PACs was a prohibition on political committees set up by people other than candidates (i.e., “unauthorized” committees) from using a candidate’s name in the PAC official name or a PAC project name, unless they were opposing that candidate.

The reason for this naming restriction was to reduce opportunities for fraud and donor confusion.

For example, if an unethical operative can form a PAC or a PAC project called “Support Bernie Sanders,” and create a website and Facebook page with that name, then individuals may think they are contributing to Sanders’ campaign when in reality they are funding an “unauthorized” committee —  which may use the funds to line the pockets of the lawyers and consultants who set up the committee.

Yet on August 2, the D.C. Circuit Court of Appeals declared that the naming restriction was an unconstitutional content-based restriction on political speech, and ordered that the FEC, the agency charged with administering campaign finance law, be blocked from enforcing the rule. The lawsuit was filed by Pursuing America’s Greatness, a super PAC that supported Mike Huckabee’s presidential run and wanted to create a website and Facebook page called “I Like Mike Huckabee.”

As a result of the decision, a scam PAC operator like the Tea Party Leadership Fund can create a “project” called, for example, “Donald J. Trump for America”— a slight variation on the name of Trump’s own campaign committee, “Donald J. Trump for President”— and then hammer his supporters with fundraising emails.

Although the fundraising appeal must include an easily-overlooked disclaimer stating that it is “not authorized by any candidate or candidate’s committee,” many activists will nonetheless send donations thinking they are helping Trump. But in reality, their money is likely to go into the pocket of a scam PAC lawyer like Dan Backer, whose law firm DB Capitol Strategies specializes in setting up PACs and fighting in court to knock down campaign finance restrictions.

Outside of the now-defunct naming restriction, FEC, says it has little authority to address these “scam PACs.” Its inability to regulate even borderline fraudulent activity was made most obvious during Allen West’s last campaign.

In recent years the FEC has urged Congress to address scam PACs, for example by enacting legislation barring PAC operators from spending funds for “personal use” and strengthening the laws against fraudulent misrepresentation.

Congress, however, has failed to take up those proposals.

Sixty-nine-year-old Dominick Tenuto recalled his experience being trapped by a scam PAC. He donated to National Campaign thinking he was supporting the Republican Party.

Fusion reporter Casey Tolan uncovered how National Campaign has raised an astonishing $5.67 million in “unitemized” donations of $200 or less, but donated only $12,500 to candidates. Most of the money raised was funneled to consulting and fundraising companies apparently associated with the PAC’s leaders.

“It makes you feel like you’ve been victimized,” Tenuto told Fusion. “I guess this is the world we live in.”

After the court in Pursuing America’s Greatness gave scam PACs a new way to fleece well-intentioned activists, the situation will likely only get worse.

What Is Dark Money?

Dark Money Groups Operate With Impunity While The Government Does Nothing