The Right to Vote & the Criminal Justice System

Voters in jail pending trial or for misdemeanors are usually eligible to vote but cannot easily access the means to cast a ballot. People with felony convictions are often disenfranchised by state law well past their release from incarceration. Procedures for rights restoration after a felony conviction are often confusing or difficult to navigate. And other rights restoration procedures hinge access to the ballot on payment of fines and fees, leaving many too poor to vote.

To provide equal access to voting for this historically disenfranchised community, CLC seeks to expand and simplify voting rights restoration laws, provide clear and accurate eligibility information to people with convictions, and ensure access to the ballot for those in our jails nationwide.

Most people understand that contact with the criminal justice system can have an impact on the right to vote, but few understand the varied and complex ways an arrest or conviction can work to disenfranchise justice-involved voters. 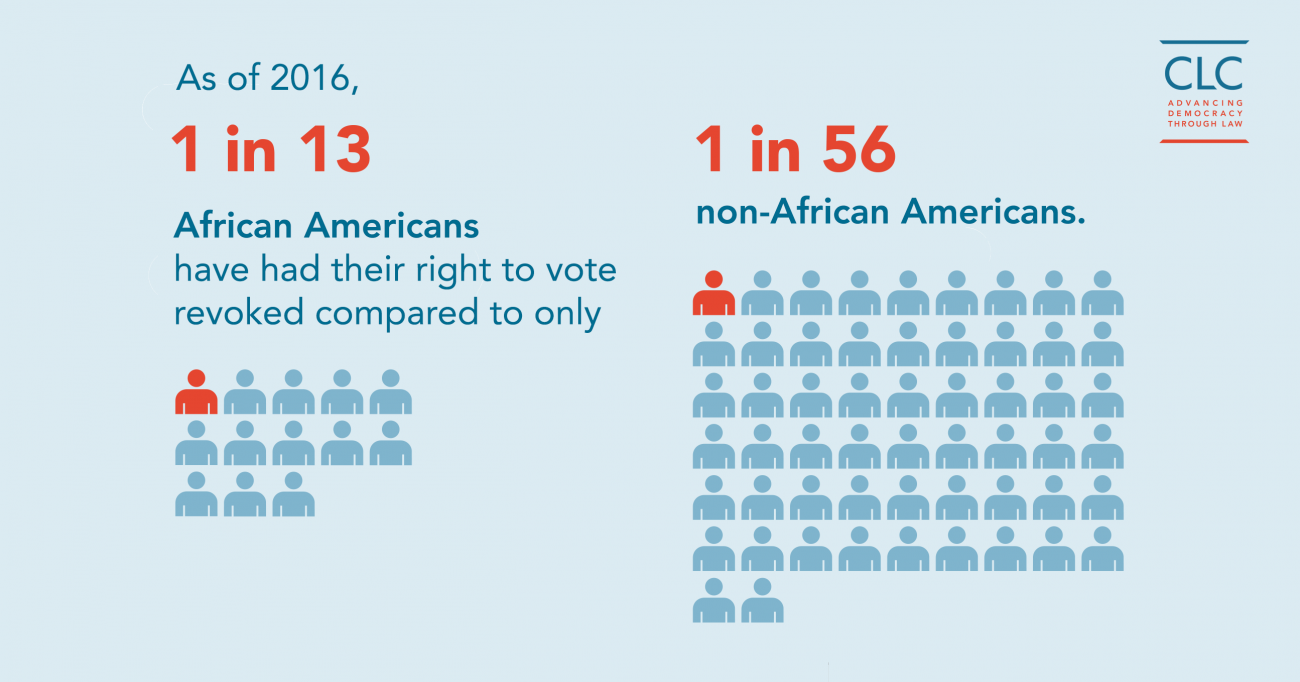 However, the negative impact of felony disenfranchisement laws only begins there. The differing criteria for both felony disenfranchisement and voting rights restoration across the states create a dense and confusing patchwork of voter eligibility law. Election officials are often untrained on felony disenfranchisement and rights restoration law and misinform citizens. Many Americans are eligible to restore their voting rights but the processes to do so are unnecessarily bureaucratic. Others are locked out of restoring their right to vote simply because they cannot afford to pay their fines and fees. And administrative errors often lead eligible citizens with past convictions to be turned away at the polls.

Since the laws are confusing, there are few resources are available to assess voter eligibility after a conviction, and rights restoration is often burdensome, many Americans err on the side of simply not voting. Thus, these laws not only strip millions of their right to vote, they pose substantial barriers to voting for tens of millions more Americans.

Moreover, the criminal justice system affects voting even for those who are never convicted of a crime. Jail-based disenfranchisement is another often overlooked way in which the criminal justice system deprives people—particularly low income, people of color—of their political voices. Half a million people are incarcerated in pretrial detention each day, people who have not been convicted of any crime and often simply cannot afford to pay bail—all of whom retain their right to vote. Americans do not lose the right to vote before they have been convicted of felonies even if they are incarcerated. Also, in most states, people do not lose the right to vote when they are incarcerated for a misdemeanor. However, because they are incarcerated, eligible jailed voters cannot access their polling places. Without infrastructure in place to provide these voters with alternative access to the ballot, they cannot exercise their constitutional right to vote. Unfortunately, few jails provide eligible voters with the resources they need to vote. It is time to take steps to ensure these voters have real access to the ballot box.

Disenfranchisement not only affects individuals with past convictions or arrests; it also disempowers the minority communities to which many belong. In one final example, consider the effect of prison gerrymandering. In many states, incarcerated people are counted for the purposes of redistricting far from their homes in the often white, rural communities where they are incarcerated. They are then “represented” by someone who they cannot vote for and who has no connection to their social or political communities, inflating the political power of jurisdictions that are home to prisons at the expense of the jurisdictions that are home to citizens who are too often imprisoned. In 2019, Washington and Nevada joined the states that have put an end to this practice. More information and resources about ending prison gerrymandering are available from the Prison Policy Initiative.

From felony disenfranchisement laws to money bail practices, many of the laws that create this system of disenfranchisement were deliberately designed to target and disempower people of color, and they continue to disproportionately impact people of color and distort our democracy today. Justice-involved Americans are citizens, they should have a say in deciding their community’s and the nation’s laws that directly impact their lives.

If our democracy is really intended to be by the people and for the people, we must take steps to ensure that all voters can have their voices heard on Election Day.

Consider the following approaches to addressing these problems:

If you have questions about this policy proposal, we'd love to hear from you! Just e-mail us.

Return to the start of Democracy U.