CLC Spotlight: NY Times Editorial Board Says Racist Voting Laws are a “Stain on the Idea of Democracy” 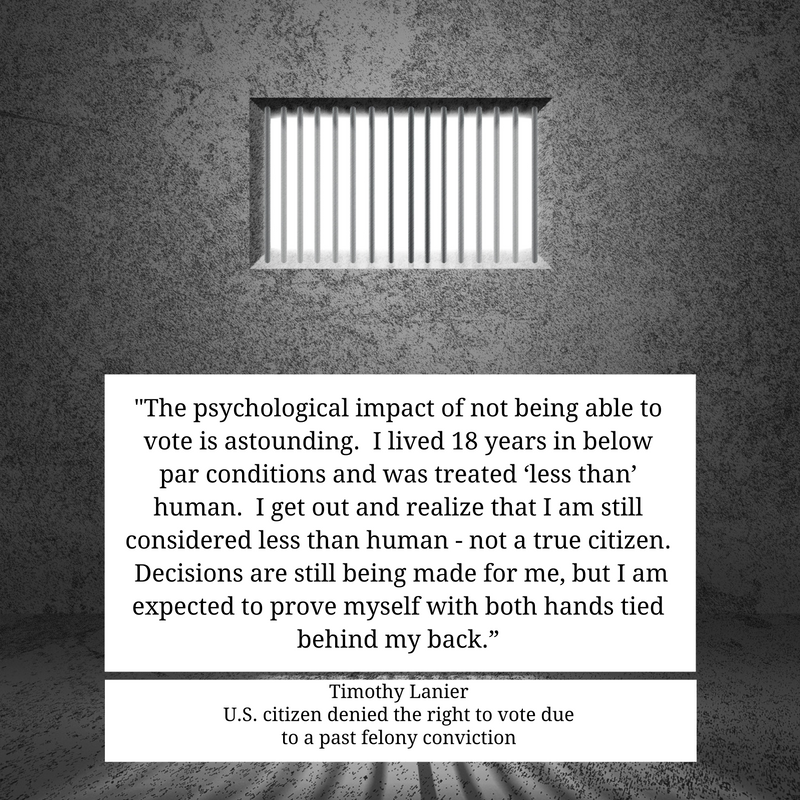 Today’s New York Times highlights how the same laws that were central to Jim Crow are still barring nearly 6 million Americans from voting in the 2016 election.

Citizens with past felony convictions are permanently disenfranchised in 12 states, while a majority of states have some form of limits on voting for these individuals. Campaign Legal Center last week filed a challenge to dismantle the felony disenfranchisement system in Alabama, one of the most severe and discriminatory in the nation.

The Times aptly points out that these laws “date to the late 19th and early 20th centuries, when states in the former confederacy – from Texas to Florida – set out to reverse the effects of the 15th Amendment, which guaranteed African-Americans the right to vote,” an argument at the heart of our litigation.

Our complaint shows how the felony disenfranchisement system in Alabama primarily harms people of color and distorts our democracy. In Alabama, the law disenfranchises about 15 percent of black adults or more than 130,000 black citizens.  Alabama’s law is particularly discriminatory because it requires voters to pay fines and fees to restore their voting rights. A requirement that a U.S. citizen with a past felony conviction must pay all legal financial obligations in order to be eligible to restore her voting rights is a modern day poll tax and violates the 24th Amendment.

In Alabama, for example, a wealthy person with a conviction may be able to vote whereas an impoverished person with a conviction cannot. Even if we ignore the starkly disproportionate discriminatory effect of mass incarceration on felon disenfranchisement, the requirement that someone pay back ballooning court fees and fines in order to vote has a much harsher impact on the minority community.  Our star-studded legal team has developed a number of legal theories and claims, featured in today’s NY Times editorial, that will create a legally viable pathway for changing the jurisprudence on felony disenfranchisement in Alabama and possibly nationwide.  Read our plaintiffs’ stories and learn more about the case, Thompson v. Alabama.

Read more coverage on our case:

New York Times: Suit Accuses Alabama of Bias in Law That Bars Some Felons from Voting

Can People Vote in Jail? Yes, But It's Very Challenging