5 Ways Secret Money Makes Its Way into our Elections

To reduce political corruption, we need real transparency about who is spending on elections so that politicians cannot benefit from unlimited, secret money from special interests to support their campaigns. Voters have a right to know who is spending big money to secretly influence our vote and our government to rig the political system in their favor.

So how does dark money enter the political system? 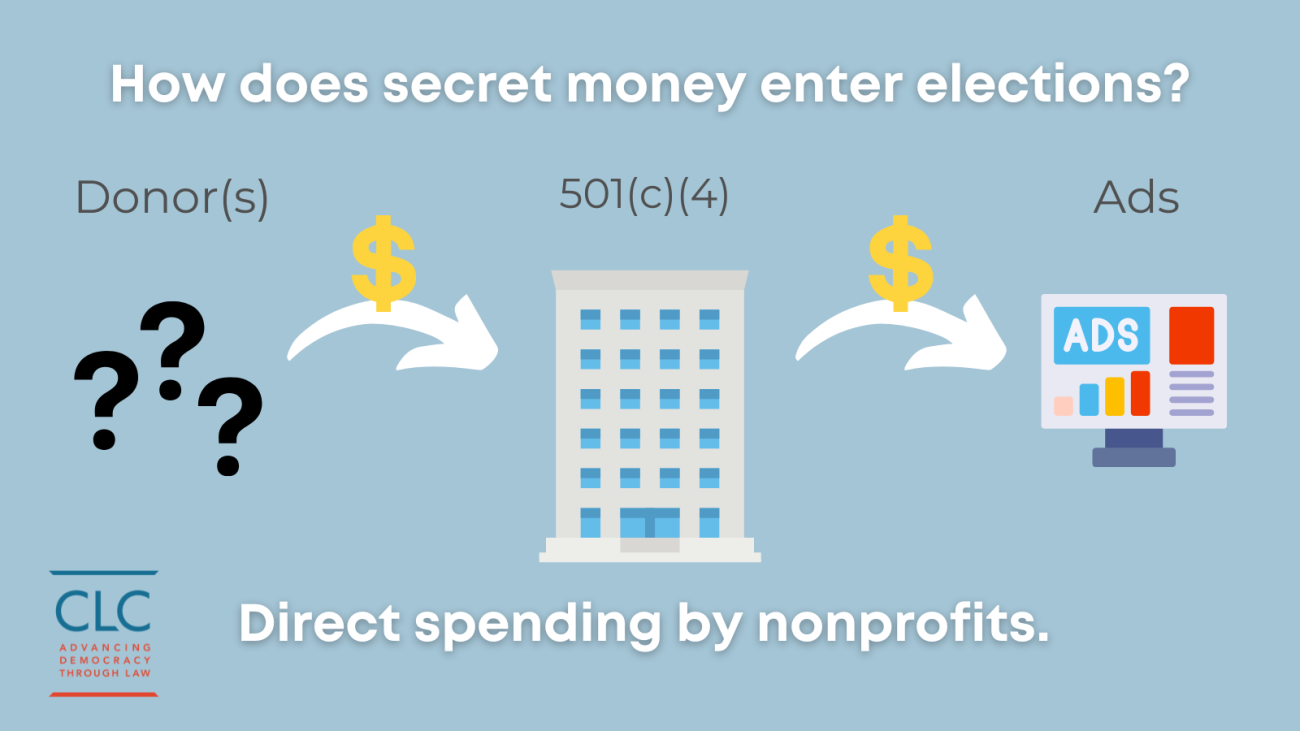 Many of us are familiar with 501(c)(3)s, the Internal Revenue Service (IRS) designation for nonprofit organizations with a charitable mission that allows donations to the organizations to be tax deductible. But another type of nonprofit is often used to funnel secret money into the electoral system.

These groups claim tax exempt status as “social welfare” organizations under section 501(c)(4) of the tax code. They do not disclose their donors, but can spend money supporting and opposing candidates – so long as such election spending is not their “primary purpose” (often viewed as less than half of their overall spending). This secret spending used by these groups to influence elections is sometimes known as “dark money.”

501(c)(4)s can accept donations in unlimited amounts, including money from corporations and wealthy individuals, and can use that money to directly fund political ads bolstering or attacking candidates, or to finance other 501(c)(4) groups that do the same. This means that special interests can use a network of 501(c)(4) groups to spend an unlimited amount of secret money to back their preferred candidates, rigging the political system in their favor while concealing their involvement. 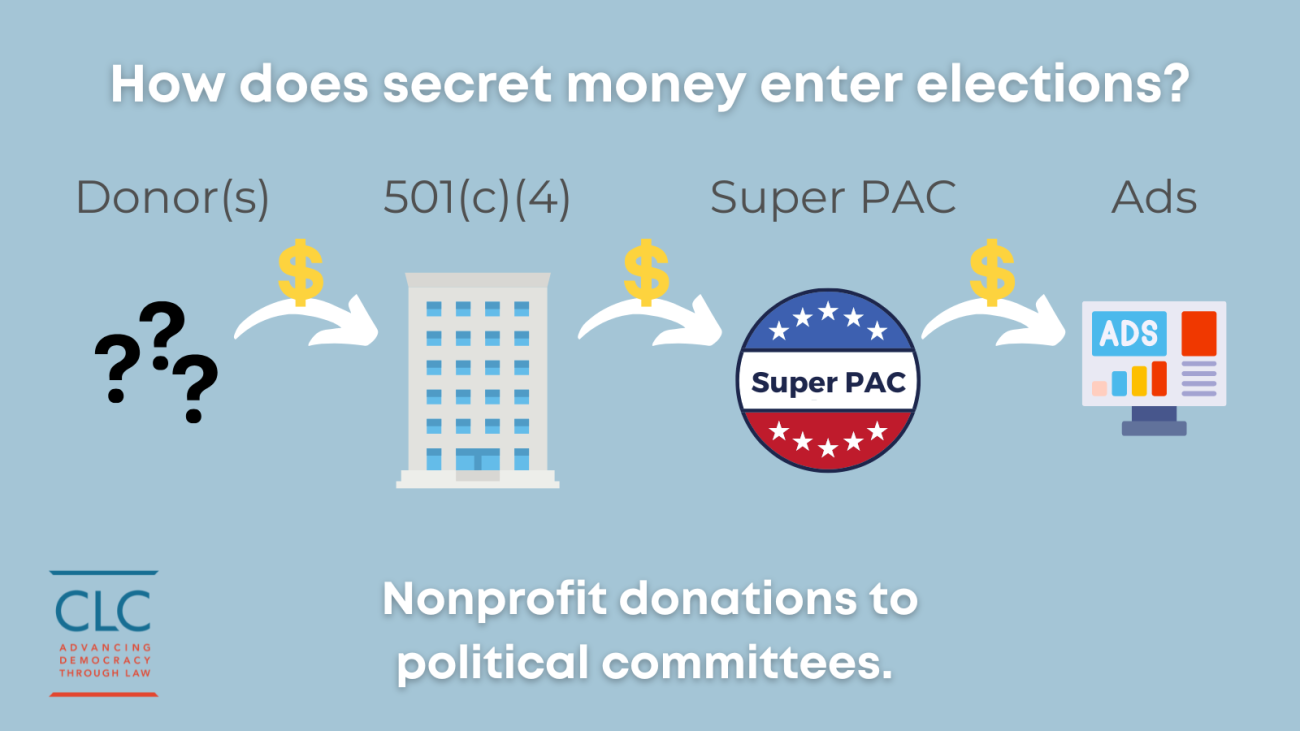 Political committees (PACs), including super PACs, are required to disclose their donors. But when PAC donations are contributed through 501(c)(4) groups — which are not required to disclose their donors — the original source of the PAC’s funding remains hidden. When used in this manner, PACs become part of a daisy chain to funnel secret spending into the political process.

Super PACs cannot give money directly to candidates, but they can raise and spend unlimited amounts to pay for ads explicitly supporting or attacking candidates, including money that comes from 501(c)(4)s. As such, an unlimited amount of secret spending can flow through these groups. 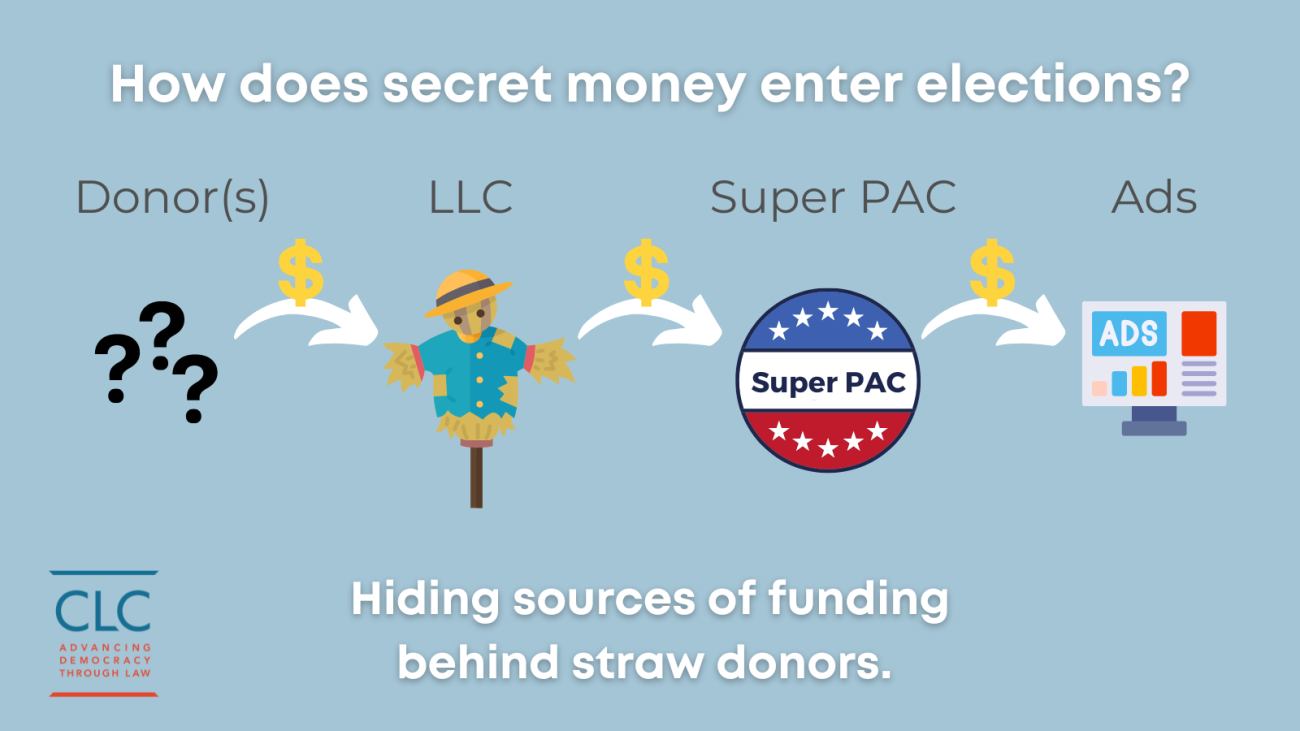 Another avenue for dark money to enter the political system is using “straw donor” schemes, which —unlike the other practices listed here — violate existing campaign finance laws.

In a straw donor scheme, wealthy individuals or special interests use an intermediary entity, such as an LLC or a trust, transfer funds to the entity, and then direct the entity to make a political contribution in its own name. The scheme conceals the true sources of election spending because the contributions are reported by the recipient, usually a super PAC, as being made by the straw donor — not the true source of the funds.

Despite being a violation of campaign finance law, this tactic can often be hard to detect and is therefore still a popular avenue to introduce secret spending to the political system. And even when it is detected, the law is seldom enforced by the FEC. 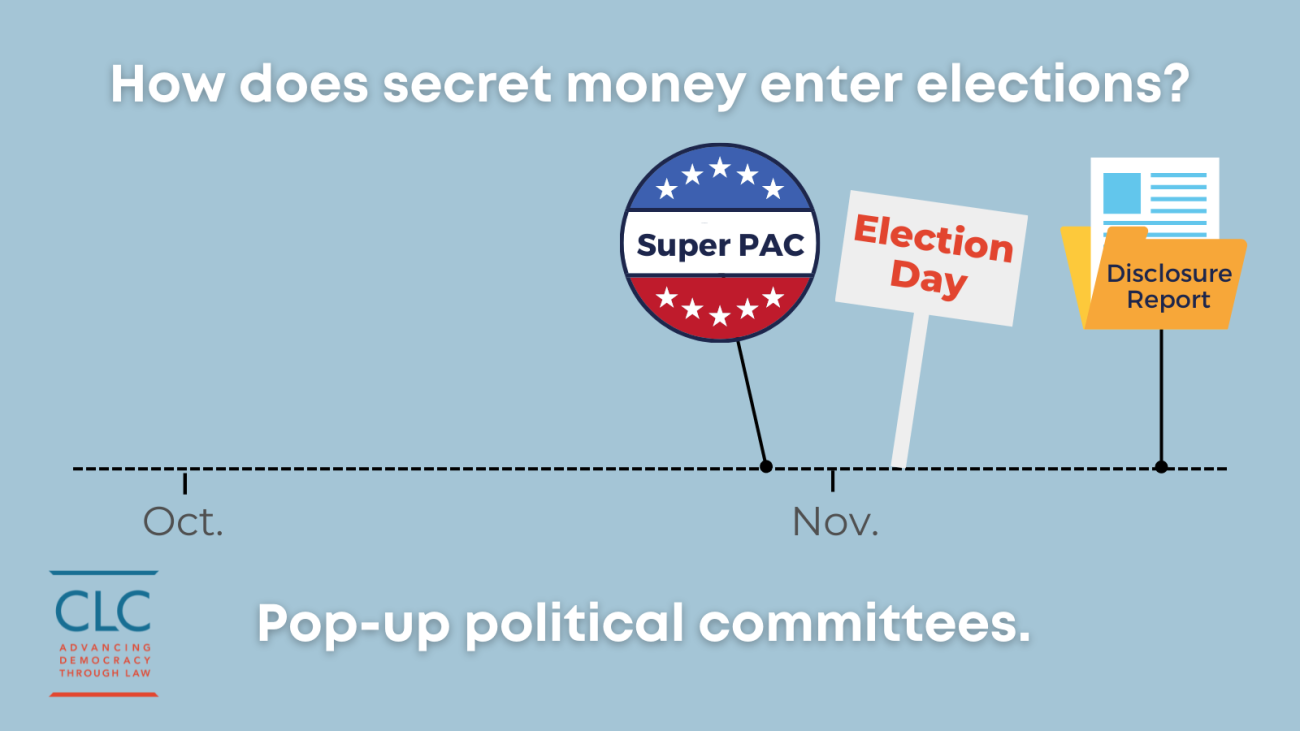 Super PACs, like all political committees, are required to disclose their donors by filing disclosure reports at regular intervals — usually quarterly or monthly. But another strategy these groups have devised to conceal the sources of their spending is to delay formation and registration until just before an election. By delaying registration and election activities until the crucial few days or weeks before an election, these “pop-up PACs” are able to circumvent federal transparency rules and keep their donors secret until the next reporting deadline, which falls after the election.

This strategic delay enables super PACs to run election ads that are deliberately misleading - often while posing as a local entity - and concealing the wealthy special interests funding it until after voters cast their ballots. This tactic undermines voters' right to know who is funding these ads so they can properly weigh their credibility and cast an informed vote. 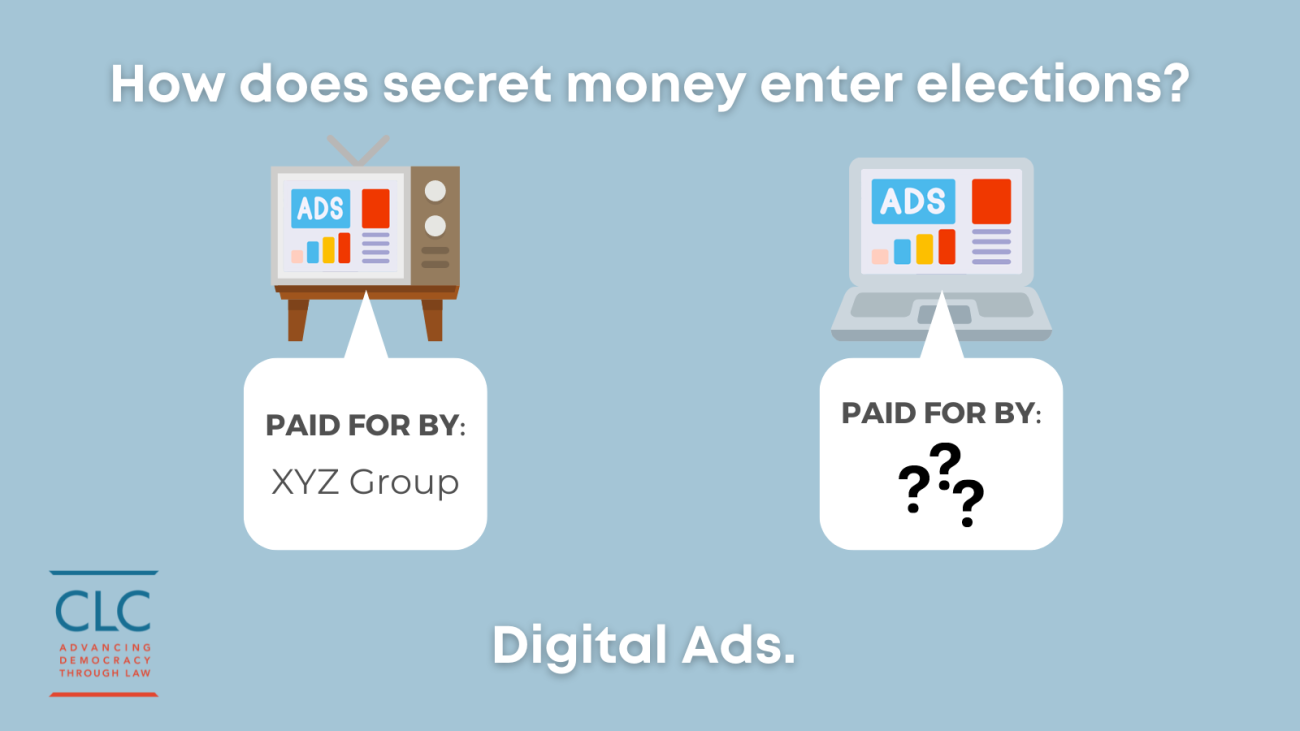 Our digital ad disclosure laws are woefully out of date, providing yet another avenue for dark money to enter the political system. Under existing federal law, an ad on TV or radio that identifies a candidate and is run near an election must include a disclosure statement indicating who paid for it, and whether it is authorized by any candidate. These statements often sound something like, “This ad was paid for by group Y and is not authorized by any candidate.”

But these requirements, which create transparency for voters, are not uniformly required online. An identical ad that is instead run on a website or social media platform is not subject to the same requirements, once again leaving voters in the dark on who is trying to influence their vote.

The Federal Election Committee (FEC), which is the only federal agency whose sole responsibility is overseeing the integrity of our political campaigns, has not only failed to update campaign finance regulations to curtail these practices and improve transparency, it has also consistently failed to enforce the laws that currently exist.