This guest piece is co-written by Ellen Chaffee, a retired university president and David Schwalbe, a retired rancher, both in their 70s. The authors are married and live in Bismarck, North Dakota.

The more we learned about our broken political system over the years, the more determined we became to take it back. Our home state, North Dakota, is like a moderate-sized city with very long streets. We have lived here for decades. Everybody knows everybody. Until recent times, everybody trusted everybody until proven otherwise. But with all the out-of-state oil money pouring in, that feeling has eroded over time. Our story is about how the fracking boom illustrates a larger national problem, how money decides who has the power.

This is what happened.

In 2011, the multinational corporation ConocoPhillips left a thick packet on our doorstep that they wanted us to sign.

The more we tried to understand the complicated terms of the proposal, the more concerned we became. ConocoPhillips is the world’s largest independent energy production company, and they wanted permission from the state to create a 33,000-acre mega-unit so the company could make more money faster – at the cost of major harmful impacts on an important state park, more ruination of landowners’ properties, and smaller, slower payments to mineral owners.

Three elected officials would decide the matter. The governor, attorney general and agriculture commissioner make up the North Dakota Industrial Commission, which regulates the drilling and production of oil and gas. North Dakota’s oil and gas regulatory setup is highly unusual. It puts three top elected officials directly in charge of an industry that, through its executives and political action committees, can and does contribute to the officials’ election campaigns.

The commission frequently falls short of holding companies accountable for failure to uphold environmental and safety standards and generally uses a hands-off approach with industry. This is at the same time when environmental incidents like oil spills, pipeline leaks, and improper hazardous waste disposal had become more common, frightening homeowners statewide.

Powerful special interests create organizations with bland or attractive names, pool their wealth, and use their money and leverage to buy politicians and favorable public policy. In North Dakota, the American Legislative Exchange Council (ALEC) wields a shocking level of control over our state legislature. The leaders and many members of the state house and senate are ALEC members.

A Sense of Betrayal

The Industrial Commission sent interested parties a letter saying there would be a 45-day grace period to figure out the complicated situation before taking a vote on ConocoPhillips’ request. We prepared to provide more public input at a hearing to consider opposing voices from affected citizens.

Instead, six days later without further notice, and just two days before Christmas, the commission voted unanimously to approve the proposal. Suddenly, it wasn’t complicated any more. We wondered why.

We later found that shortly before the vote a cash infusion of $93,000 came into Governor Jack Dalrymple’s campaign war chest from those with a direct interest in the mega-unit, along with a total of about $550,000 from oil-related executives, lawyers and political action committees.

We felt outraged and betrayed. It was also an eye-opener.

A giant oil spill in Tioga, North Dakota in 2013 frightened people even more. The small town was rocked by the largest on-land oil spill in recent American history. Also, an oil train exploded near Fargo in 2014. We decided enough was enough. After looking at the commission’s ethics policy – which was crafted in the 1990’s – we knew it was not keeping up with the times. Moreover, the state had no comprehensive ethics policy or ethics commission.

We formed a group of 12 people who had about 150 collective years of service to the state of North Dakota under their belts, which became North Dakotans for Public Integrity. We made a dedicated effort to ensure it would be a bipartisan effort.

In the beginning, a small group of North Dakotans met on Tuesday mornings and discussed the best way to proceed with the ballot initiative over coffee. David is on the far right. (Photo courtesy of Ellen Chaffee).

In the beginning, we did research to see how other states have tackled ethics issues. Our neighbors in South Dakota were working on a measure to improve transparency in politics, so we figured that if they could do it, so could we. We learned about the national groups Campaign Legal Center (CLC) and RepresentUs and enlisted their help to ensure our proposal would avoid legal pitfalls experienced in other states.

Things really took off from there.

Ultimately, we crafted a ballot initiative that created an ethics commission and added reforms to the way that campaigns are financed. It included a measure to strengthen transparency of spending to influence elections and government action. It significantly curbs the influence of money on public officials in the executive and legislative branches.

By tapping into national groups, we discovered that there was a huge, rapidly growing democracy movement across the United States. We were inspired by the thousands of people who were willing to provide resources to nonprofits committed to democracy reform.

Getting On the Ballot

We empowered volunteer activists, and through a combination of all our efforts, collected 10,000 more signatures than the 26,000 required to get on the ballot. 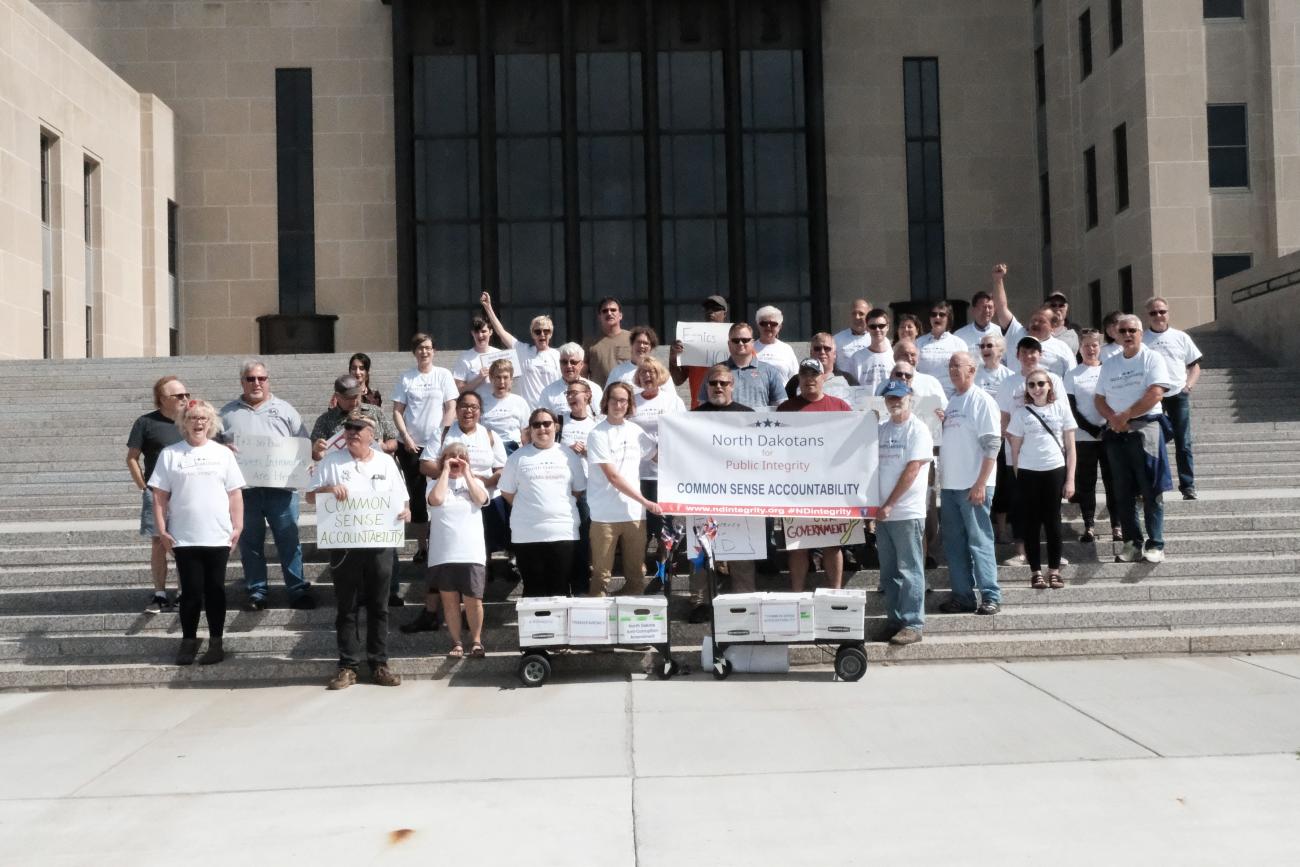 An army of volunteers descend on the North Dakota State Capitol to drop off signatures (see the carts in the front of the photo). Photo courtesy of Ellen Chaffee.

Then the opponents’ money started pouring in.

Large, out-of-state corporations took notice of what we were doing. Forces like ALEC, the North Dakota Petroleum Council, the North Dakota Chamber of Commerce and the Koch political networks, with their unlimited resources, were determined to defeat us. The forces preventing politicians from working for the people are powerful, but we stuck to our message. We have a right to know who is spending money to influence our elections, and we deserve to know that our lawmakers are making decisions based on what's best for voters, not just the wealthy special interests corrupting our system.

When Election Day came, we were holding our breath. It was like somebody hit the pause button. Will voters approve our historic reforms? Our faith in North Dakota voters was affirmed when we beat all that power and money, winning with 54% of the vote. We joined 46 other states in creating an ethics commission and enacted some of the most powerful laws in the country to reveal and restrict the influence of money on elections and government action.

Still, despite our best efforts, wealthy special interests continue to pour millions of dollars into federal and state elections. We still have work to do. Currently, we are working with CLC on implementing the new constitutional mandate to make North Dakota a leader in election spending transparency. An election-reform ballot initiative is in the works for 2020.

Our win in 2018 proved that that you could run a good, clean campaign and still win. We are continuing this fight because people need to speak up so that big companies do not have all the power over our democracy. All around the country, people are discovering the joy in nonpartisan, issue-based work that restores government based on the will of the people.

Visit our toolkit to learn how to bring democracy reform to your hometown.