How Michigan Voters Came Together to Flip Gerrymandering On Its Head

Issues
Redistricting
Image
Photo courtesy of Voters Not Politicians. This photo is of Nancy's son Kai George, age 2, who went door-to-door canvassing to spread the word about Prop 2.

The author, Nancy Wang, is Executive Director of the nonprofit Voters Not Politicians, CLC’s client in the fight to save Michigan’s successful ballot initiative campaign to create the state’s first Independent Citizens Redistricting Commission.

I was teaching at the time that I returned to Michigan in 2016. That fall, I joined a Facebook group where the topic was gerrymandering in Michigan. The Michigan Republican Party had controlled our state’s redistricting process in 2001 and 2011 and had gerrymandered our maps to “historical proportions.”  I felt like fighting back against gerrymandering was a way I could do something to tackle a structural problem and have real impact in my new home state.

It seemed evident to me that giving politicians the power to draw district lines was bound to lead to politicians abusing their power to keep themselves in office. We knew the system needed to change so that voters could choose their politicians – and hold them accountable – instead of politicians choosing their voters.

So members of our online group began having conference calls. And we turned the conversation to what regular people like us could do about it.

Little by little, we educated ourselves about the issue. We tracked what other states had done that worked. Arizona and California for example, served as inspiration, since they had citizen-led commissions that were operating successfully. Those commissions were established by voter-led ballot initiatives, and we were excited to discover that we had the power under our state Constitution to put initiatives on the ballot too. We had more discussions and finally met in person. We decided that we would try and get on the ballot. But nonprofits in the democracy space warned us that huge institutional roadblocks stood in our way. We would be facing a state supreme court that many viewed as highly partisan and politically motivated, and that was stacked against us with five Republican justices and two Democratic justices. Plus, we had no money and no campaign experience. No one seemed to like our odds.

We knew CLC was involved in federal gerrymandering lawsuits, so we came to CLC to talk about best practices and anticipate pitfalls. A community of redistricting reform advocates had emerged that CLC’s Ruth Greenwood was a part of. We relied on CLC for advice on redistricting reform, and CLC’s insight and expertise, not to mention moral support, kept us on the right track, giving us the support we needed to keep going.

I ended up leading our volunteer policy committee. It included people you might expect, like lawyers and retired judges, but also many folks with no policy experience, like a veterinarian, neuroscientist, and students. We held 33 town halls in 33 days to collect feedback from voters across the state. One town hall had over 300 people in the audience! We steadily gained momentum, and the impossible began to look possible – we eventually built an army of over 4,000 volunteers and attracted 14,000 small donors. We collected 425,000 signatures with all volunteers to qualify for the ballot and people began to care about gerrymandering and talk about the issue every day. 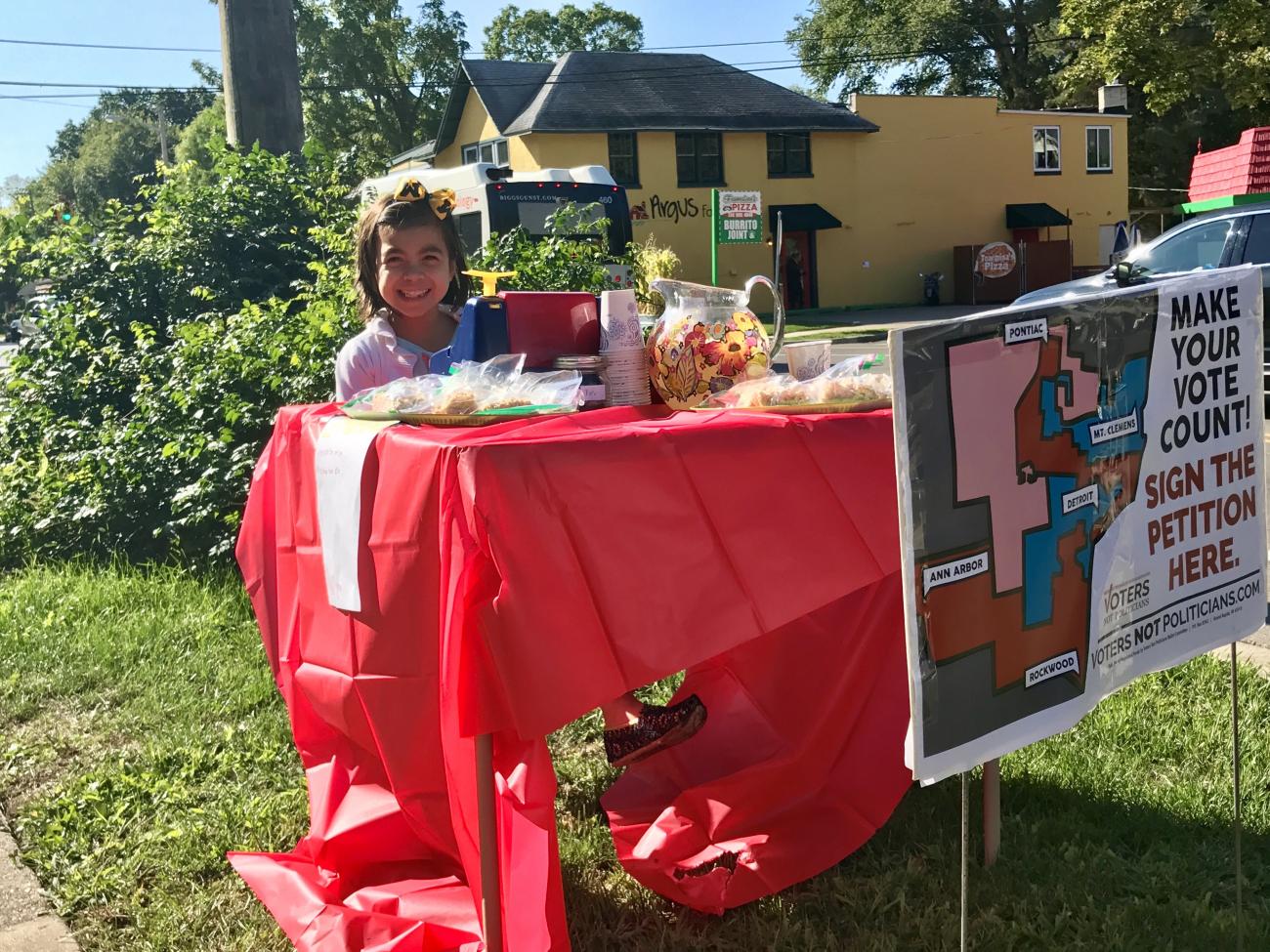 Then we got sued, like everyone said we would, and the prospect of our people-led movement ending in the courtroom felt very real. Our opposition sought to kick us off the ballot, so voters wouldn’t have the chance to pass redistricting reform. The Court of Appeals ruled unanimously in our favor, but the case was immediately appealed to the Michigan Supreme Court. On the last day of the court’s term, July 31, 2018, Voters Not Politicians volunteers gathered together at bars, restaurants, and homes across the state to await the decision. We constantly refreshed our Twitter feeds and had a group text thread going. We were so elated when we won 4 to 3 – we would be on the ballot and the voters would get to decide how Michigan’s district lines are drawn!

While we still had burdens to overcome, we felt that we could accomplish our goal, since talking to voters was all we had to do next.

Through polling, advertising and direct outreach, we conducted a massive public education campaign to explain to Michiganders why we needed to get politicians out of the redistricting process and put a citizen-led commission in their place.

Election Day was a blur. Although I believed that we would win, we really had no idea what the final result would be. Our amendment passed with 61% of the vote (2.5 million votes)! I’m especially heartened by the fact that our proposal won in both “red” and “blue” counties. We won 66 out of 83 counties statewide, including Alger County, where Donald Trump won by 20 points in 2016 (64% in favor of our proposal) and Jackson County, the birthplace of the GOP, where Trump also won by 20 points (nearly 60% in favor of our proposal).

Fair redistricting is about stopping politicians from rigging our elections. It’s an issue that should unite voters across the political spectrum, and I was so happy to see that that’s what happened here in Michigan.

We had a huge party in Detroit with all of our volunteers and supporters, who we knew quite well by that point. I couldn’t believe I had the privilege of being a part of this campaign from start to finish. It was a true group effort, one of those real-life ‘feel good’ stories.

On the policy committee, we said from the beginning that everyone who wants to get involved can be involved. We had a really diverse group, including a lactation consultant named Karen from East Lansing, Michigan. She came up to me to thank me for being so inclusive and making her feel valued; she had no previous policymaking experience. As it turns out, she came up with an idea that is now enshrined in our state Constitution! She said it was one of the most meaningful experiences she had in her life.

Accomplishing our goals with people like Karen has been incredible. It inspires me to know that – even in a difficult political climate – people from all different backgrounds can solve problems together.

Fast forward to 2019. The Michigan Republican Party has sued to prevent the secretary of state from implementing the citizens’ commission. They are trying to undo the will of the people. Michigan voters have completely flipped the system of gerrymandering on its head, giving power back to regular people, so it was bound to upset the politicians in power. But we must fight to protect our powerful, one-of-a-kind, citizen-driven movement to strengthen democracy in our state. We are proud to be in this fight with CLC!