We Won’t Be Distracted By Shiny Objects: Congressional Medals Are No Substitute for Restoring the Voting Rights Act 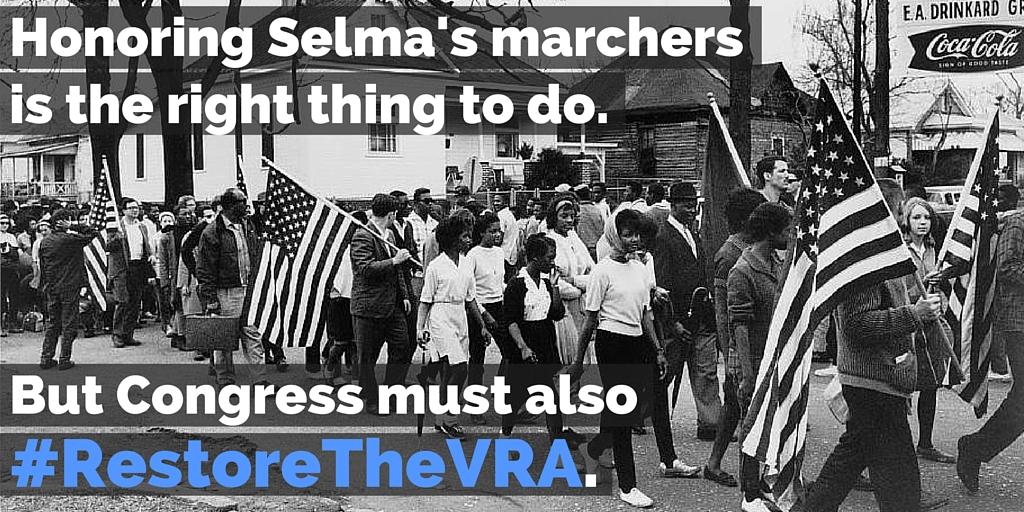 Members of the U.S. Senate and House of Representatives will gather tomorrow to award the foot soldiers of Bloody Sunday, Turnaround Tuesday and the final Selma to Montgomery March with the Congressional Gold Medal. This award constitutes the highest civilian honor bestowed by Congress and marks a fitting tribute to the brave men and women who risked life and limb so that “every American citizen would be able to exercise their constitutional right to vote and have their voices heard.”

Yet, however befitting and overdue this award may be, we must not accept it as a substitute for meaningful legislative action to safeguard the fundamental right to vote.

Minority voting rights are perhaps more imperiled today than at any time since these brave marchers gathered at the Edmund Pettus Bridge in 1965. Just three years ago, the U.S. Supreme Court gutted a key provision of the Voting Rights Act, despite four reauthorizations and thousands of pages of congressional findings that showcased why the law was still needed. The 2013 decision, Shelby County v. Holder, dismantled the VRA’s coverage formula, which determined which states and local jurisdictions were required to gain approval from the Department of Justice or a federal court before making changes to their electoral laws and procedures due to histories of racial discrimination in voting.

Many of the states that would have once needed to seek preclearance from the DOJ acted within hours of the Supreme Court’s ruling, implementing onerous voting restrictions, such as voter ID laws, that had the intent and effect of burdening minority access to the polls. These laws threaten to disenfranchise millions of people across the country and would previously have been barred by the Voting Rights Act. Scarily, without congressional action, 2016 will likely mark the first presidential election in more than 50 years without the full protections of the Voting Rights Act.

There are currently two bipartisan bills – the Voting Rights Advancement Act and Voting Rights Amendment Act – before Congress that would remedy the Supreme Court’s ruling by implementing new coverage formulas that target jurisdictions with histories of racially discriminatory voting practices. The two proposals vary in their breadth of coverage, but either one would be a welcome step forward from the untenable status quo that allows politicians to manipulate elections on the basis of race. Despite these viable bipartisan solutions, the Republican leadership in the House and Senate has refused to even hold hearings on these bills.

Speaker of the House Paul D. Ryan has proclaimed his support for passing a new coverage formula in theory, while simultaneously refusing to even co-sponsor the Republican-led Voting Rights Amendment Act and rebuffing calls to pressure House Judiciary Committee Chairman Bob Goodlatte to hold hearings on the bill, lest it violate Speaker Ryan’s perception of “regular order.” For his part, Representative Goodlatte has stated that he would “certainly look at any instances of discrimination in people’s access to the ballot box because it is a very, very important principle,” while ignoring documented proof of such discrimination presented to him in person by national civil rights leaders.

The stark contrast between the proclaimed concern of these elected officials and their actions would be laughable, if it did not affect such a fundamentally important right. We must not allow this award to substitute for legislative action. The best way to honor the legacy of the heroic foot soldiers who marched in Selma is to restore the coverage formula of the Voting Rights Act, rather than standing idly by as voting protections are rolled back by 50 years.