Maine just took a big step toward a fairer democracy

On Tuesday, Maine became the first state to adopt ranked choice voting for state and federal elections. Though this may sound like an obscure change to the electoral process, it’s not. It’s a huge deal.

For all future U.S. Senate, U.S. House, gubernatorial, state senate and state house elections in Maine, we will know which candidate truly has the support of a majority of the voters. That is quite a victory for democracy.

Allowing voters to rank their choice of candidates in order means that the candidate that wins will be the preferred choice of a majority of voters, and no one will “throw away” votes anymore.

For example, CNN has claimed that those who voted for Gary Johnson and Jill Stein “helped elect Donald Trump,” but we will never know if this is true.  Those who voted in the presidential race on Tuesday were not given the option of listing their second preference for president. Maybe the Johnson and Stein voters would have preferred Clinton to Trump, or maybe not.

Here’s how ranked choice voting works: you go to vote you put a number 1 next to your first choice for the office, a number 2 for your second choice, all the way to the end of the candidate list.

Watch our video on RCV to learn more about how it works.

When it comes to counting, the “number 1” votes are tallied, then, whichever candidate has the least votes will have those votes distributed according to the voters’ “number 2” votes.  Imagine a race between three candidates, A, B and C, where no candidate gets more than 50% of the vote: 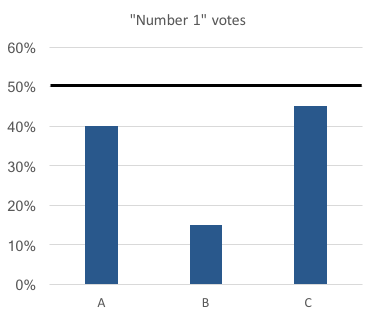 Under our normal rules, C would be the winner. But if we use ranked choice voting, we may find out that those people who voted for B, actually put A as their second preference, so if we add up the second preferences of the B voters, A may actually win the race: 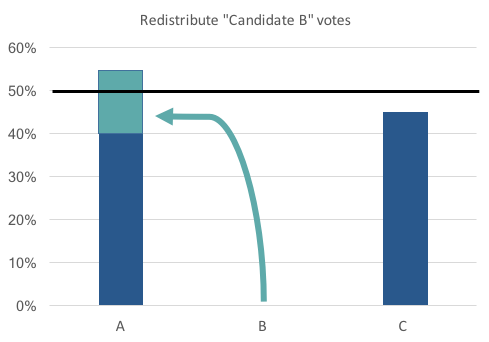 Or, the voters for candidate B may split their preferences between candidates A and C, and so C will win: 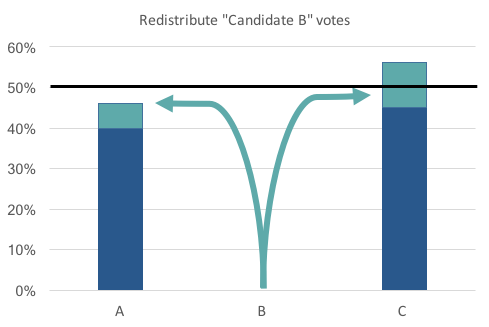 Either way, we will know that the candidate that wins has more support among voters than the other candidates.

It’s straightforward and easy - and by adopting ranked choice voting, Maine has led the country as a model for better ensuring every vote counts.