Issues
Voting Rights
Image
A line of voters waiting to cast their ballots in the Washington DC primary election on June 2, 2020 snakes around the block. Photo by Casey Atkins/Campaign Legal Center.

“Throwing out preclearance when it has worked and is continuing to work to stop discriminatory changes is like throwing away your umbrella in a rainstorm because you are not getting wet.” Justice Ruth Bader Ginsburg, Shelby County v. Holder (2013).

In the Reconstruction Era immediately following the U.S. Civil War, Black voters in the South were able to participate in federal elections in 1868 for the first time. During this period, these new voters received an umbrella to protect them from the rainstorm of racism. This newfound access led to a level of political representation that Black voters in the South have not experienced since.

However, the end of Reconstruction in 1877 also meant the end of protection for Black voters in the South and the beginning of racially fueled voter suppression. Unsurprisingly, there has not been a Black person elected to any statewide office in Mississippi or Louisiana since the Reconstruction era despite the fact that the two states have the highest percentage of African Americans in the country.

Many of the voter suppression tactics that have resurged across the South since Shelby County v. Holder (2013) – a Supreme Court decision which invalidated a key provision of the Voting Rights Act – can be directly traced to the tactics implemented in the Jim Crow South after the end of Reconstruction. On Juneteenth, which commemorates the freeing of former slaves in Texas over two and a half years after the Emancipation Proclamation was issued, we take a look at the ongoing legacy of voter suppression affecting Black voters in the United States.

Today, states eliminate the number of Black registered voters through voter purges. For example, in Wisconsin, while the Black voting population comprises only 5.7% of the state’s total electorate, over one-third – approximately 35% – of the voter purge notices mailed to voters in 2019 went to the two counties where the vast majority of Wisconsin’s Black voters reside, Milwaukee and Dane. Milwaukee and Dane County account for 74.6% of Wisconsin’s Black voters and Black voters make up 17.45% of the counties’ electorate. The same is true in Georgia, where the Secretary of State routinely purges voters simply because they have not voted recently, which particularly impacts minority voters in the state. 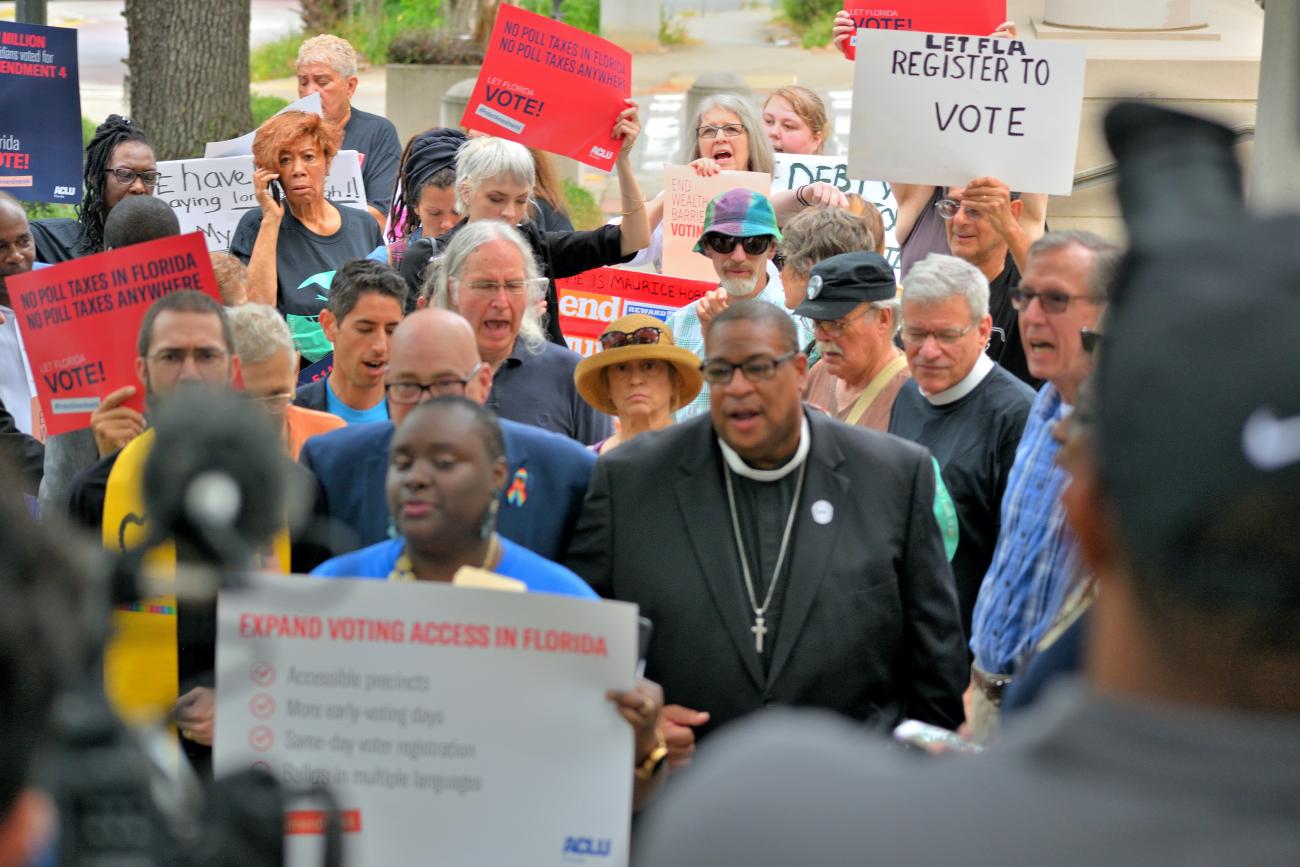 People participate in a rally in support of Amendment 4 in Florida. Photo by ACLU.

To this day, felony disenfranchisement laws have the undeniable effect of diminishing the political power of Black communities. 2.2 million (over one third) of voters disfranchised through these laws are Black. Nationwide, one in every 13 Black adults cannot vote because of a felony conviction; while 1 in 56 non-Black voters are disenfranchised as a result of a felony conviction. In three states (Florida, Kentucky, and Virginia), more than one in five Black adults is disenfranchised because of these laws.

According to the Brennan Center report on the “Racial Wait Gap,” over the past five years, Latino and Black voters were more likely than white voters to wait in the longest of lines on Election Day: some 6% of Latino voters and 7% percent of Black voters reported waiting 30 minutes or longer to vote, surpassing the acceptable threshold for wait times set by the Presidential Commission on Election Administration, compared with only 4.1% of white voters. This is another racial disparity faced by minority voters across America. States must act to ensure that voters in Black and Brown neighborhoods do not experience longer wait times than voters in predominantly white areas.

States like Texas base their criteria for closing polling places in part, on traffic at each voting site, which translates to disproportionate polling location closures in areas with predominantly Latino and Black residents, who participate in elections at a lower rate than White Texans. As a result, voters in Latino and Black communities have less places to vote and longer wait times.

Strict voter ID laws have similarly been shown to have a racially discriminatory effect on voters. Prior to a successful challenge by Campaign Legal Center (CLC) and partners to Texas’s voter ID law, the state disenfranchised over 600,000 registered voters who did not have the types of ID Texas’s law demanded. The types of ID required purposefully left out large swaths of the population. For instance, a state license to carry a handgun, which may be legally obtained by some non-U.S. citizens, was a permissible form of identification, while a student ID or even a Veterans’ Administration ID was not. States must act now to loosen voter ID restrictions to ensure that Black voters are not disenfranchised.

As the country celebrates Juneteenth, Congress and state governments alike cannot assure Black people that their voices are being heard without ensuring that Black people’s votes count. This includes restoring the Voting Rights Act, federal protection against voter purges, the end of felon disenfranchisement, the elimination of the “Racial Wait Gap” and the end of discriminatory voter ID laws. Black lives will not matter in this country until Black votes also matter.