The author, Bonnie Miller, is president of The League of Women Voters – Washington County, and resides in Fayetteville, Arkansas.

Arkansas is one of the 10 most gerrymandered states in the U.S. Lobbyists in Little Rock strike backroom deals with Arkansas politicians to draw voting districts so their chosen candidates win.

A volunteer-led grassroots organization called Arkansas Voters First was on the verge of changing that by launching a citizen movement to take the redistricting process back by preventing national political operatives, special interests and lobbyists from continuing to dominate the process.

The spread of COVID-19, however, has threatened to upend our efforts, as our hopes to meet the July 3 deadline to collect the requisite signatures to put a ballot initiative before voters on November 3 is starting to fade away.

Coming to this realization has been difficult for me on a personal and emotional level because of the efforts we had invested in pursuing fair maps. While this is very frustrating, we remain as committed as ever to redistricting reform and want to tell our story.

I first became involved with the League of Women Voters when I attended an event discussing redistricting reform, and it seemed the League was the group best positioned to pursue solutions in Arkansas.

I feel strongly about this issue and think politicians should not be involved in the process of redrawing district lines at all. When Arkansas drew new legislative districts in 2010, they took on crazy shapes that fail to adequately represent communities of interest.

In October 2019, I was selected by the state League chapter to attend a training in Washington D.C. to learn how to be a “Redistricting Champion” in Arkansas.

Ever since, I have conducted informational sessions, held public meetings to discuss redistricting reform, and promoted our campaign through social and local media outlets. I’ve also talked about the importance of establishing independent commissions as a speaker on panels.

One event that I helped organize (see our signs below) was a celebration of 100 years of the local League. We held the event on March 1, 2020 and around 200 people attended. 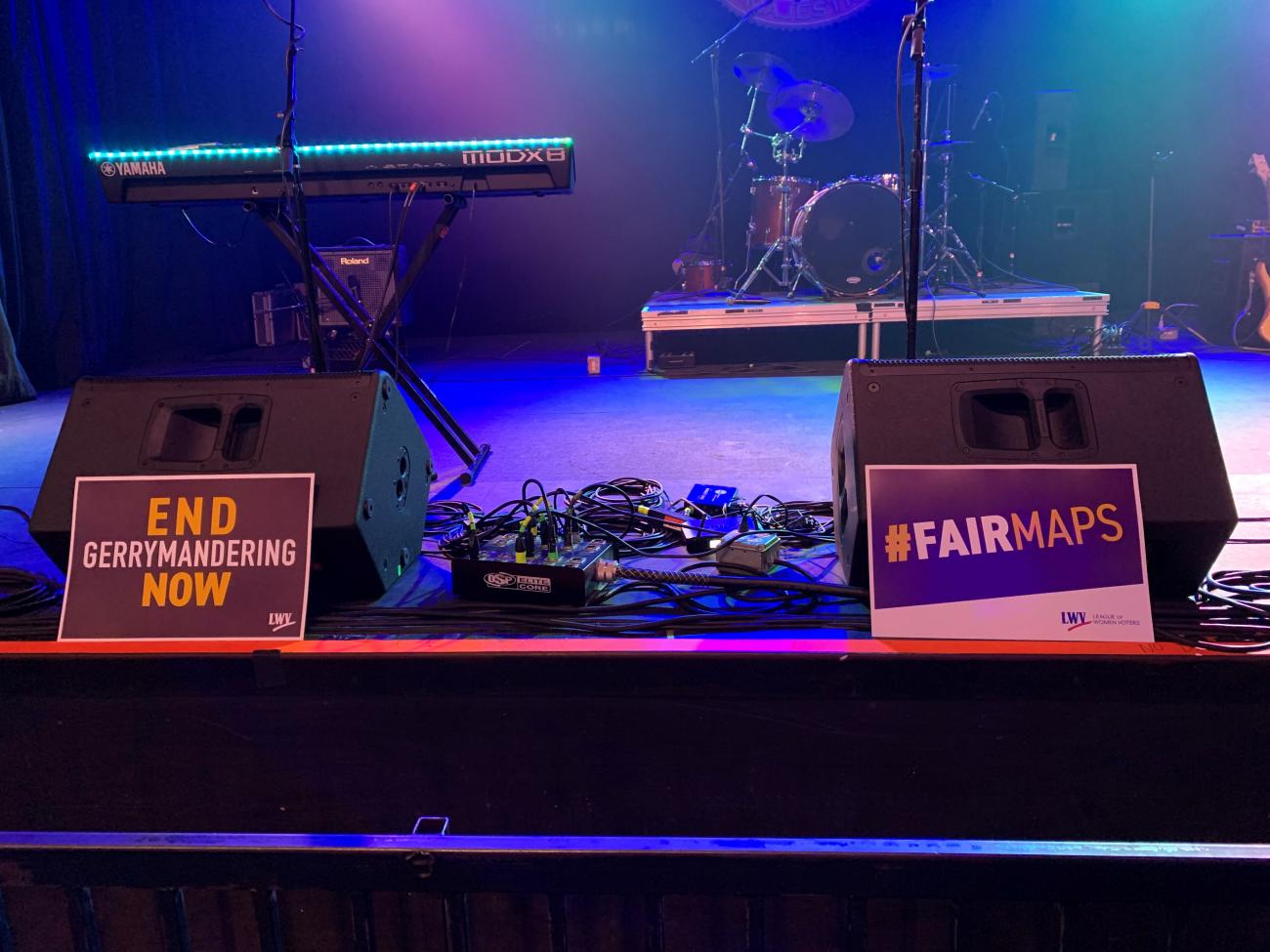 On March 5, 2020, we filed our proposal with the Secretary of State’s office to create a commission to put voters in charge of redistricting. The commission would be made up of nine individuals and reflect a balance of the major parties in Arkansas. It would have three Democrats, three Republicans, and three members not affiliated with either party.

All commission meetings would be transparent and open to the public. Arkansans would be able to provide input on the maps. The district lines are redrawn after each census and because 2020 is a census year, there is a sense of urgency. We felt then, and continue to feel, it may be now or never.

We launched a signature gathering campaign and had public education events to talk about the devastating effects of gerrymandering. We found that the more people hear about gerrymandering, the more they support the establishment of independent commissions. We had town halls planned and were hoping to spread the word about our campaign at local farmers markets and libraries.

As March progressed, however, COVID-19 upended our daily lives – and it was after only about a week of signature gathering that guidance came down from the government about avoiding social gatherings and maintaining social distance to slow the spread of the virus. This stymied our public education efforts and took the wind out of our sails.

State law requires us to get 89,151 signatures to appear on the ballot, an enormous burden given social distancing. Even more problematic is the witness requirement. Arkansas has one of the most onerous requirements in the country and has a 63-page manual to show for it. The requirements are so complicated they are designed for any reasonable person to give up.

Under ordinary circumstances, this would be difficult work, but I’m confident we could have met all the requirements because this idea is so popular with voters.

But now? How are we supposed to generate excitement for this ballot initiative if people are terrified to leave their house? We certainly don’t want anyone to have to risk their health or choose between their health and participating in direct democracy.

It’s going to be incredibly difficult to reach the threshold of signatures by the July 3 deadline, and the witness requirement is going to make it almost impossible for immunocompromised people and the elderly to have their voices heard, given that they are at the highest risk for contracting the virus.

Seeking Intervention From the Courts

That’s why I am joining other Arkansas voters in a legal challenge brought by Campaign Legal Center (CLC) and Arkansas Voters First to the signature requirements. One of the people challenging the requirement, Bob Allen, is currently undergoing chemotherapy to fight cancer.

Requiring Bob to meet in-person with a canvasser to witness his signature puts his health in jeopardy. He shouldn’t need to risk hospitalization and death to make his voice heard.

We should be able to submit e-signatures and not need a witness to see people sign it. In addition, we need more time. With our lawsuit, we are hoping the court will grant an extension of the submission deadline from July 3 to September 3, given the unprecedented circumstances we find ourselves in.

There is a lot on the ballot in November beyond the race for President. COVID-19 has harmed so many people. It should not also stop us from expressing ourselves and participating in the democratic process.

If the court fails to intervene, Arkansas will be stuck with gerrymandered maps for the next decade – and the desire of Arkansas voters to establish an independent redistricting commission will be unfairly silenced. The effects of this will linger long after the virus has run its course and unnecessarily delay the will of Arkansas voters to create fair maps.

Fight for Fair Maps in Your State