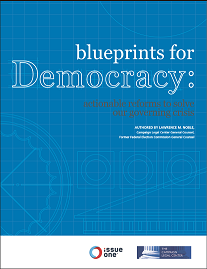 Today, the Campaign Legal Center and Issue One released a jointly produced report which details a suite of specific solutions to reduce the power of money in politics and restore faith in public institutions. The report and accompanying website, “Blueprints for Democracy,” provide a comprehensive overview of how reform has been implemented across the country and best practices for legislators and advocates enacting change in their local communities. Coming on the heels of recent ballot initiative victories in Seattle and Maine, ‘Blueprints’ is a timely breakdown of both the support for and feasibility of true money-in-politics reform.

“The current system is so rigged that our government is in a state of perpetual paralysis. This is a governing crisis that must be addressed,” said Issue One Executive Director Nick Penniman. “So ‘Blueprints’ highlights states and municipalities to demonstrate that there are viable models for reform that can pass muster with Main Street Americans and the current Supreme Court.”

As the cost of the 2016 election cycle continues to skyrocket, public opinion of the current campaign finance system has plummeted. A recent New York Times/CBS News poll found that 84 percent of Americans, including super majorities of Democrats and Republicans, think money has too much influence over politics; the same poll found 85 percent in favor of fundamentally changing or completely rebuilding the way we finance campaigns. Additionally, every major presidential candidate has addressed the outsized dominance of money in politics. While nearly all presidential candidates have bemoaned aspects of the current system, voters want more specifics about how our leaders will truly fix our broken political system.

Last Tuesday, voters from both parties in Maine, Seattle and San Francisco joined the people of Tallahassee, Wisconsin and elsewhere by passing ballot initiatives that reorient their local democracies back towards Main Street. These results show that the hunger Americans have to fix this governing crisis is exceptionally strong.

“Building bipartisan consensus is critical, because without the support of the many Republican legislators and governors across the country, chances for meaningful reform are slim,” said Trevor Potter, president of Campaign Legal Center. Potter, who was appointed to the Federal Election Commission by George H.W. Bush and later served as general counsel to the 2008 McCain Campaign said, “That’s why we’ve identified these constitutionally-sound, tried and true solutions that Americans of all political stripes strongly support.”

“We hope ‘Blueprints for Democracy’ lights up the minds of citizens and legislators all over the country and helps them understand all of the great progress that can be made now, as Washington falters. We must create a bipartisan groundswell of action that Congress can’t possibly ignore,” continued Penniman.

“Whether you’re a politician, an advocate or an average American, ‘Blueprints for Democracy’ is an important resource for understanding how to make government work for everyone,” Potter added.

The full report, and additional resources, can be found at BlueprintsForDemocracy.org. In the coming months and years, the Blueprints for Democracy website will catalog the latest developments as states and municipalities enact more reforms.

The Campaign Legal Center (CLC) is a nonpartisan, nonprofit organization that defends and protects our democracy in the areas of campaign finance, voting rights, political communication and government ethics.

Issue One is a 501(c)(3) organization dedicated to reducing the influence of money in politics and putting Americans of all stripes back in control of our democracy. We are generating a bigger, bolder movement for reform by recruiting new constituencies to the fight and elevating money in politics as the core civic issue of our time.