The Practical Reality of a Citizens United Constitutional Amendment 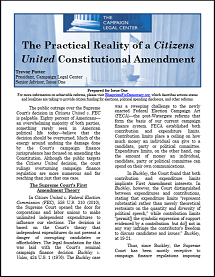 A remarkable eighty percent of Americans – both Republicans and Democrats -- believe that the Supreme Court’s decision in Citizens United should be overturned. Much of the public outrage and energy around undoing the damage done by the Court’s campaign finance jurisprudence has focused on amending the Constitution. Amending the constitution however is no small feat and the barriers are significant. This backgrounder, prepared by CLC for Issue One, examines the procedural hurdles and potential shortcomings of such a course.

Click here or on the image above to view the backgrounder.

This backgrounder was prepared by CLC for Issue One. For more information on achievable reforms, please visit BlueprintsforDemocracy.org, which describes actions states and localities are taking to provide citizen funding for elections and disclosure of spending and other reforms.