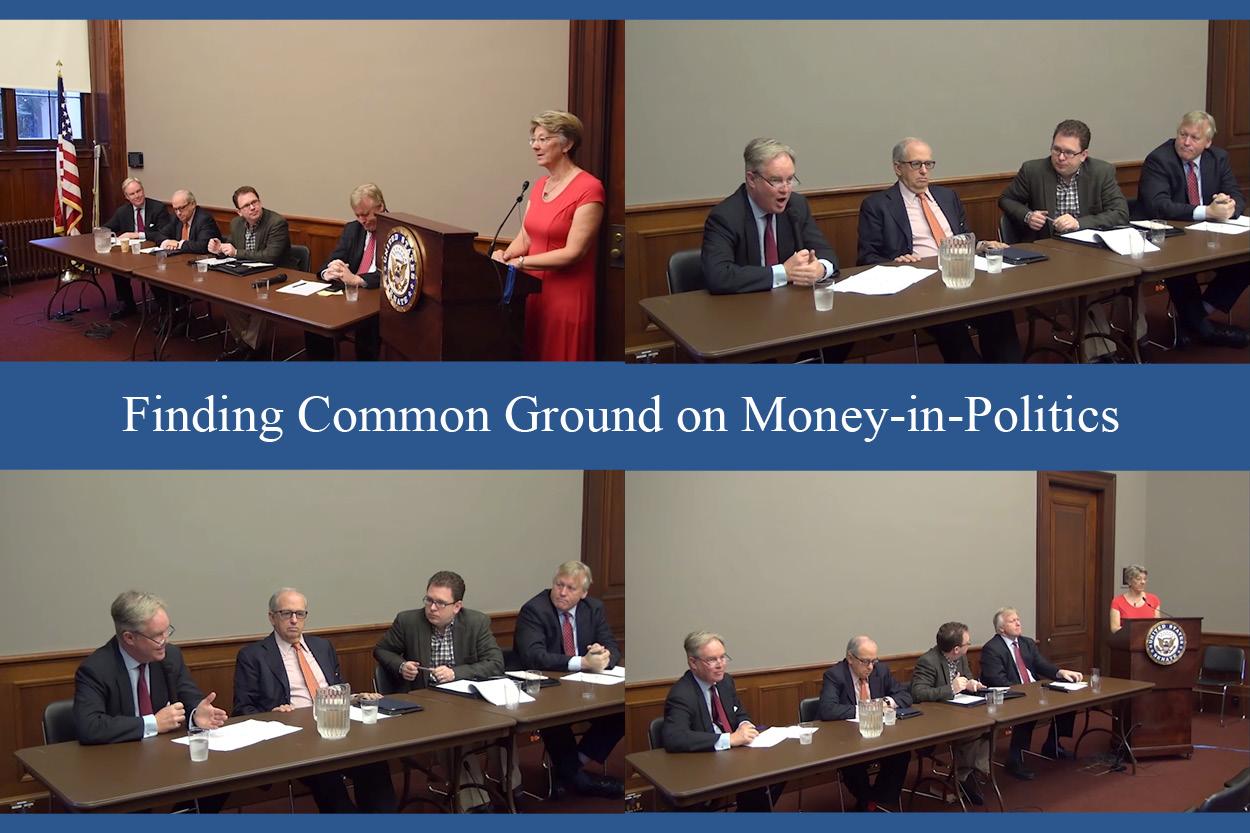 John Pudner, Tea Party Strategist and Take Back Our Republic

The Campaign Legal Center hosted a discussion on Capitol Hill on “Finding Common Ground on Money-in-Politics” featuring John Pudner, Tea Party strategist and Executive Director of Take Back Our Republic, Jay Cost, author and columnist for The Weekly Standard, Norman Ornstein, resident scholar at the American Enterprise Institute and Trevor Potter, President of the Campaign Legal Center.  Also appearing at the event was Senator Sheldon Whitehouse (D-RI) who spoke about believing in “American exceptionalism” and how United States remains a beacon of democracy for the world.

Pudner, who was the campaign manager for Rep. Dave Brat (R-VA) when he upset then-Majority Leader Eric Cantor, focused on conservative solutions for campaign finance reform.  He noted that the money in politics issue is “top of mind” for many who are active in conservative politics and concerned about “transactional” politics.  Pudner called on the new House leadership to take a new look at this growing concern.  (14:40-15:04). He raised concerns about billionaire candidates, credit card fraud and foreign money flowing into U.S. elections.

Cost, who comes out of the reform conservative movement which favors smaller government, cast his concerns about money-in-politics in historical terms, including cronyism and “interest-group liberalism.”  He described the current campaign finance system as a regime premised on “conflict of interests” (21:17-21:56).  He also believes common ground exists on tax credits and matching funds (23:10-25:34).

Ornstein noted that the current campaign finance system has become the “wild, wild West” and that Supreme Court Justice Stephen Breyer’s predictions in the McCutcheon v. FEC case of huge amounts of money flowing into politics from a small number of donors have come true.  Ornstein commented that a lot of populist conservatives, including those who are looking at Presidential contender Donald Trump, don’t like the way things are going (29:45-30:10).  Ornstein pointed out growing support for a matching funds and tax credits as ways to increase participation of smaller donors in campaign financing.  He expressed optimism about changing the ideological, partisan divide (30:21-32:03) and laid out his views of possible reform package that includes an increase in contribution limits to $5000, disclosure, a tax credit, six-to-one matching funds and unlimited small donor funds from political parties. (1:08:34-1:09:51).

Potter pointed out that President Ronald Reagan depended heavily on the presidential public financing system, without which he would not have won the Republican nomination.  He expressed puzzlement that the notion of alternative sources of funding somehow favors one party over another (32:47-34:07).  Potter noted how the Supreme Court has contrasted the financing of judicial campaigns versus political campaigns.  He said that former Justice Sandra Day O’Connor understood politics (from firsthand experience as Arizona State Senate Majority Leader) in a way that the current Supreme Court justices do not, and contrasted how the current Supreme Court has a view of corruption that would astound our Founding Fathers (37:51-40:00).  Potter also talked about the dysfunction of the current Federal Election Commission (FEC) and the recently introduced bill to reform the structure and operations of that agency (40:25-46:02).  Representatives Derek Kilmer (D-WA), Jim Renacci (R-OH), John Carney (D-DE) and Lou Barletta (R-PA) introduced H.R. 2931, the Restoring Integrity to American Elections Act, earlier this fall.

Potter also pointed to polls that found bipartisan majorities—more than 80%—opposing the Supreme Court decision saying corporations and unions have the right to spend unlimited amounts in elections.  The poll did not use the words "Citizens United.”  (53:56-55:50).