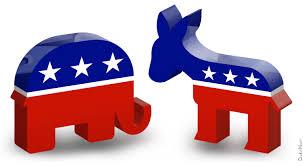 During consideration of the 2015 Omnibus budget bill, Senate Majority Leader Mitch McConnell (R-KY) unsuccessfully tried to insert a rider to eliminate coordinated spending limits for political parties. He lost because of opposition from an unlikely coalition -- most (though not all) Democrats and some Tea Party Republicans who don't trust their party's establishment. Sen. McConnell made this move under the guise of "strengthening the political parties but in reality, it would have provided yet another avenue for big money to enter into American campaigns.

This renewed "concern" about the health of America's political parties is entirely predictable in the aftermath of after the Citizens United decision. That opinion and its progeny, opened the floodgates to virtually unlimited spending in American elections, and paved the way for the creation of Super PACs and dark-money groups.

Debate about the role of our nation's political parties is a recurrent theme in American politics, from Founding Father James Madison's concerns about the destructive potential of "factions," to the collapse of the Whigs due to infighting, to the efforts to re-impose party discipline after the fractious 1972 Democratic convention. Even during consideration of the McCain-Feingold bill (Bipartisan Campaign Reform Act), opponents of the measure predicted the soft money ban would kill the parties. They actually seemed disappointed when the parties actually raised more in hard money after the bill went into effect than they had in hard and soft money combined.

Now once again protectors of the current big-money system are cloaking their desire to return to the discredited soft money system by expressing concern about the state of America's political parties.

Even though Sen. McConnell failed this time, don't expect this faux reform to go away any time soon. The longtime opponents of real reform who are now pushing the "strong party" narrative have recently joined hands with a small group of academics and the so-called "political realists" who are pushing for less emphasis on preventing corruption and "good government" and a return to "transactional party politics" as a way to make the government more efficient.

Here's the problem: In practice this advocacy for robust parties is getting translated into legislative proposals to allow donors to give unlimited amounts to parties. The current campaign finance system is already too dominated by big money donors who are rewarded with access, influence and -- at times -- policy victories. The realists' solution would make the situation worse and actually weaken America's political parties.

Political parties should be a way for voters to find like-minded individuals to share ideas and strategies and to augment one's voice in the political system by joining with others. Parties can provide a useful means of coalescing viewpoints and sometimes imposing needed discipline to focus on achieving a desired end. At their best, political parties engage citizens, provide a means to organize mass movements of citizens who share common political views, and gather in individuals who might otherwise feel isolated or un-empowered to effect political change.

Instead, what we have now is a system in which the parties have become laundromats for money rather than consensus-seeking mechanisms catalyzing an individual's political power, especially at the state level. As the recent indictments of party leaders in New York and the string of convictions of Illinois Governors on corruption charges, state political parties often devolve into machine-style politics where a cadre of political bosses wield power. They are unaccountable to the public and are intent on shaking down the moneyed interests seeking favors and/or favorable treatment from the powerful. This further tilts the system toward large wealthy donors.

At the national level, the parties are, as scholars Tom Mann and E.J. Dionne put it in a June 2015 Brookings paper, "deeply complicit in the new money system." "[I]f the goal of the realists is to strengthen parties, they should join rather than resist reformers in rolling back the Wild West world of political money that Citizens United and lax-to-non-existent regulation by the Federal Election Commission have created," Mann and Dionne said.

The political parties at both the state and national levels have too often turned away from focusing on providing an effective means for average Americans to participate in politics and instead act more often as brokers for an elite cadre of establishment politicians who seek to maintain their own power rather than "democratize" our politics. Yet, "democratizing" our politics is really what the system needs. Less than one percent of all Americans make a contribution of $200 or more to a federal candidate. This level of participation in our privately financed campaign finance system is a serious weakness in our democratic process. Moreover, Super PACs and dark-money groups are overwhelming the voices of candidates and parties. It is true that both candidates and parties have adjusted and become more adept at exploiting the Super PAC loophole, forming entities that are run by former party officials and operatives. But that is not enough for the likes of Sen. McConnell and his allies.

Sen. McConnell's attempt during consideration of the Omnibus budget bill to lift the limits on coordinated spending is not the right remedy for what ails our current campaign finance system. Nor is it a cure for the ideological polarization that has left Washington dysfunctional. As Mann and Dionne point out:

It is just as likely that diverting some portion of the outside mega-donations now associated with super PACs and politically active nonprofits to party campaign committees would exacerbate the ideological distinctiveness of the parties and strengthen their ties to the major interest groups in their networks. Party finance was not the cause of partisan polarization and it is not a promising solution to the governing problems left in its wake. The evidence from the actual behaviour of party leaders is that if the law allowed them to raise more money, they would use the opportunity-- and then encourage donors to continue to give to sympathetic outside groups.

In January 2015, Ben Smith reported in Buzzfeed that Republican National Committee Chair Reince "asks only that big donors make the golden money [money to the parties] their first contribution, then they're free to head off to the super PACs."

The solution to stronger parties is not to make them one more coffer for the big money donor to fill, creating a hollowed out entity. As Mann and Dionne state, "In a system already awash in big money, the notion that all would be well if big money were simply allowed yet another channel of influence stokes us as the opposite of realism." Proposals like Sen. McConnell's would "enhance the influence of the [big donors] who already have their interests amply represented in the system." Rather, stronger parties will arise when there are new incentives for small-dollar donors and activists to engage and fill in the hollowed out party structures.

This issue is almost certain to be re-fought in 2016. It remains an open question whether those who seek every opportunity to weaken limits on the role of big money in American elections will taste victory the next time.

Meredith McGehee serves as Policy Director at the Campaign Legal Center where she directs the legislative and media policy efforts. In addition, she is the principal of McGehee Strategies, which specializes in public interest advocacy campaigns.

This opinion piece originally ran in The Huffington Post on January 8, 2016. To read it there, click here.